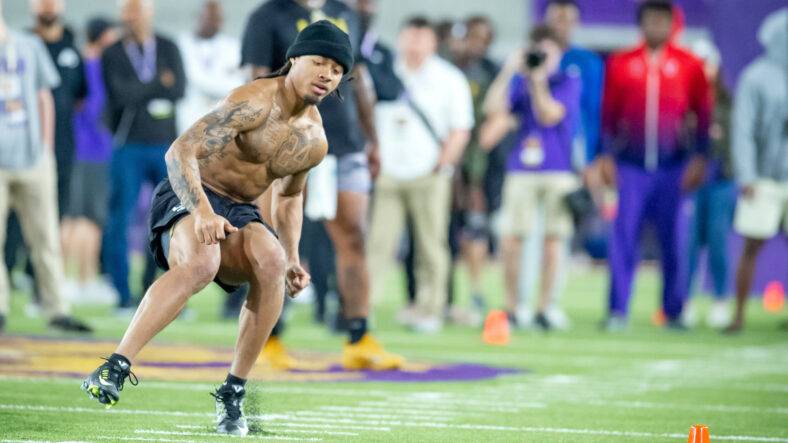 After SauceMania passed by the Minnesota Vikings a month ago, fans of the team pivoted to Derek Stingley Jr. as Sauce 2.0 for the team’s draft outlook.

For several weeks, Ahmad “Sauce” Gardner from Cincinnati was the perceived frontrunner to join the Vikings via the 2022 NFL Draft. But then Garnder orchestrated a flawless NFL Combine performance, careening his stock up the draft board and thus likely unavailable to the Vikings.

Yet, Stingley Jr. could be there, a cornerback from LSU.

According to BetOnline.ag, Stingley has close-to-even odds to be the 11.5 pick off the board on April 18th. In other words, the over/under for his draft spot is 11.5.

Of course, the Vikings choose 12th, so the suspense for Stingley Jr., at least per these sportsbook odds, couldn’t be any greater.

Minnesota drafted five cornerbacks with 2nd-Round-or-higher draft capital in the last nine drafts, but none currently play for the team. On the roster now sits Patrick Peterson, Cameron Dantzler, Chandon Sullivan, and others. To contend in a pass-happy NFL, the Vikings likely need one more corner for confidence heading into 2022 — and beyond.

Because Peterson is older and Dantzer is the only sure-fire startable cornerback under contract beyond 2022, the long-term CB need for the Vikings is grave.

Stingley isn’t the only option, though. New Vikings general manager Kwesi Adofo-Mensah could explore the draft candidacies of men like Trent McDuffie and Andrew Booth Jr. in Round 1 — and might even be able to trade back for one of those men. Then, Adofo-Mensah would have additional draft picks, plus his presumptive cornerback of the future.

However, fans’ zest for Stingley Jr. is grand for a handful of reasons. The Vikings have tremendous luck scooping LSU Tigers from the NFL Draft. The last three? Justin Jefferson, Danielle Hunter, and Henry Thomas.

LSU’s 2021 defensive coordinator now works on the Vikings coaching staff under Kevin O’Connell. His name is Daronte Jones, and he has obvious ties to Stingley Jr.

And then, not too long ago, LSU alumnus Patrick Peterson banged the table for Stingley Jr. to join his other purple team. The pro one.

All of this smoke and hype has made Stingley Jr. the realistic darling to land with the Vikings.

But according to Vegas, the effectuation of Stingley-to-Minnesota is a true toss-up.