Expect Whirlwind if Vikings Get Cheap with Justin Jefferson 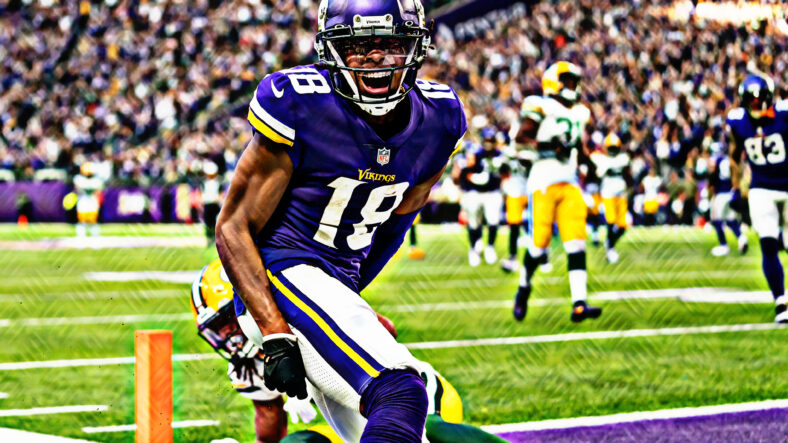 A new day exists in the NFL with wide receivers for importance, credibility, and subsequent value.

No longer are wideouts complementary pieces for an offense. Instead, they’re essential — and even mandatory — as the league evolves into a pass-happy, fantasy football-laden business.

Wide receivers in 2022 and like running backs of 1975 — the bellcows of offenses, required for a team to put points on the board. RB value is plummeting. WR worth is skyrocketing.

And soon, Minnesota will have to sign Justin Jefferson to an extension, and they can expect a whirlwind if “cheap” is anywhere near the conversations.

Why? Well, look at this week alone for proof.

Deebo Samuel requested a trade on Wednesday, although it is unclear why he wants out of San Francisco. A.J. Brown is unhappy with contract talks and pulled off the proverbial “wiping team names” from his social media pages. Moreover, Terry McLaurin for the Washington Commanders is in the same boat, wanting a new contract to align with league’s top wideouts.

All three of these men are products of the 2019 NFL Draft, chosen one year before Jefferson. If new general manager Kwesi Adofo-Mensah doesn’t take heed of the NFL’s evolving WR landscape, Jefferson could be the guy at the center of the raucous in 11-12 months. And Jefferson is arguably a better football player than Samuel, Brown, or McLaurin.

Through two seasons, Jefferson has tabulated more receiving yards than any human in history through a sophomore year as a pro. He’s that damn good. The $30 million per season afforded to Tyreek Hill will be the baseline for discussions with Minnesota and Jefferson next spring.

Of course, there are no signals anywhere that Adofo-Mensah will play hardball with Jefferson. But it’s unlikely general managers of the 49ers, Titans, and Commanders would predict the recent turn of events either.

The malcontent from Samuel, Brown, and McLaurin is a trend. There are simply too many characters in the movie for the events to be outliers. If Jefferson were drafted in 2019, he’d probably be cast in the film, too.

Thankfully for the Vikings, they can observe with knowledge aforethought how to please Jefferson when extension talks commence. Jefferson’s “new money” won’t kick in until 2025, but the talks usually start a couple of years in advance.

If they plan to approach matters like the 49ers, Titans, and Commanders, there is now precedent to serve as a cautionary tale.