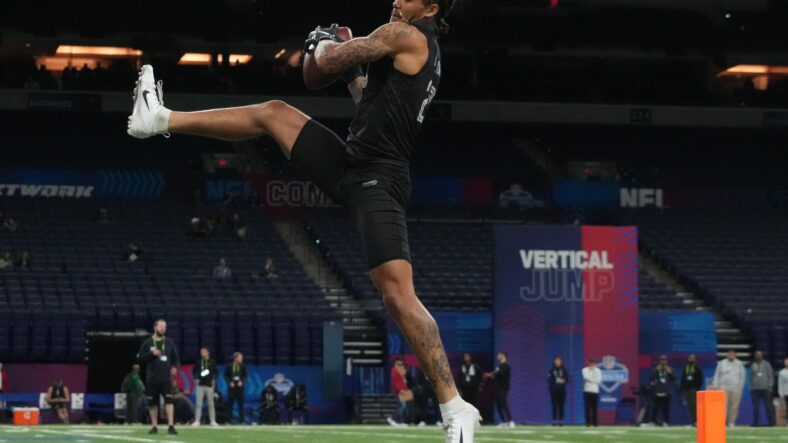 “Standouts” are not defined in an expressed gridiron manner anywhere, but generally speaking, players labeled as such are those who perform well with minimal expectations.

For example, Vikings 1st-Round draft pick Lewis Cine likely won’t be called a standout this summer because, well, he’s supposed to stand out as an alumnus of the 1st-Round draft class. That’s what 1st-Rounders do. Others, though, were plucked from later rounds and are turning heads for the Vikings early on.

A couple of Vikings names have stood out this summer, both nationally and locally.

Paul Allen from KFAN was asked on the Vikings YouTube channel to identify an early standout. He picked Jalen Nailor, a 6th-Round wide receiver from Michigan State.

Allen replied, “For me, it would be wide receiver Jalen Nailor. From where he was taken as deep in the draft and from what I saw at rookie camp and a little bit at minicamp, man, Jalen’s tough. He’s going to make the team, and I think he’s going to contribute.”

Nailor was a “big-play guy” at Michigan State, perhaps selected by Kwesi Adofo-Mensah to eventually take the top off opposing defenses. He’ll have to the scratch and claw to steal WR snaps amid Minnesota’s current assortment of players, but Allen sees the long game with Nailor.

VikingsTerritory asked Nailor last week about his wherewithal to return punts in 2022 — a role some have pegged the rookie for — and he responded affirmatively. Nailor firmly expects to be in the mix as the team’s primary punt returner in 2022. So, while he bides time to catch passes within a Kevin O’Connell offense, Nailor could realistically contribute on special teams. That’s his goal, anyway.

Nationally, Brian Asamoah was nominated by ESPN as an early standout.

The Vikings found Asamoah in Round 3 a couple of months ago, and he figures to be the primary backup off-ball linebacker to Eric Kendricks and Jordan Hicks, two men who should have starting jobs in the bag.

Kevin Seifert said about Asamoah as the Vikings summer standout, “Asamoah’s sideline-to-sideline speed was plainly evident in non-contact practices, as was his confidence. He joked with an assistant coach that he wanted $5 every time he ran past someone.”

Minnesota will feature a 3-4 defense in 2022 led by Ed Donatell. Asamoah’s skillset, which is almost safety-like, will translate nicely into the new-look defense. Think speed, speed, and more speed.

Asamoah inked a four-year, $5.49 million deal with a signing bonus of $1.17 million in June, affixing him to the purple roster until the end of the 2025 season. He’s known for “freakish” attributes — making a “freak list” in the lead-up to the draft.