Do the Rams Miss Kevin O’Connell? 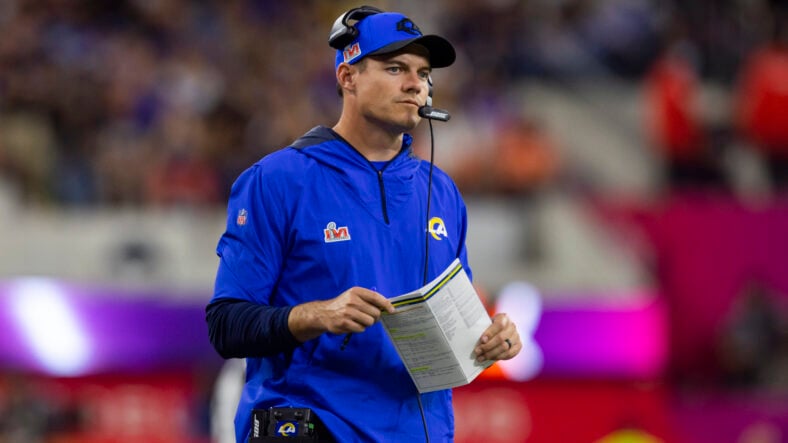 Coming into the season, I expected the LA Rams to be among the NFC’s best teams. After all, they won the Super Bowl and were returning many of their key players. Losing guys like Andrew Whitworth and Von Miller certainly hurt, but the team still had Matthew Stafford, Cooper Kupp, Aaron Donald, Jalen Ramsey, and several of their other key players. Oh, and Sean McVay was still in town.

Earlier in the season, there was some chatter about Kevin O’Connell’s absence impacting LA. Truthfully, I thought that was a touch premature. Teams – even the really good ones – regularly struggle in the early part of a season. To my mind, it was merely a matter of time before they figured it out, re-asserting themselves as one of the preeminent teams in the conference.

The Rams are a thoroughly average 3-4, which is a far cry from where they were when Kevin O’Connell was their OC. Right now, they’re 28th in the NFL in points for with a mere 16.9 per game. Defensively, things look a touch better given that they’re 18th overall. Nevertheless, they’re allowing an average of 22.4 points per game.

Last year, they did better in both areas. Their offense was 7th in the NFL with a 27.1 points-per-game average. On defense, they came in at 15th, allowing 21.9 points per game. These realities further underscore the point. The defense isn’t too far off where it was previously; the offense, in contrast, is significantly worse.

That reality brings us back to whether the Rams miss Kevin O’Connell.

What got me thinking about this idea is a recent piece on PFF. It’s a short article that outlines how LA’s team-building approach has led to the current struggles. The point is well taken; constantly trading away high picks will eventually catch up with a team. I do wonder, though, if the coaching staff subtraction is impacting things.

Now, it’s worth noting that things haven’t been perfect for the Vikings. At times, the offense has been pretty blah, unable to move the ball despite their excellent playmakers. Be that as it may, things don’t look too bad overall.

On offense, they’re 9th in the NFL with a 24.7 points-per-game average. Adding T.J. Hockenson will likely help the offense to find even more success, so perhaps they’ll be able to maintain that spot in the top 10. O’Connell doesn’t deserve all the credit for LA’s past success and nor does he deserve all the credit for Minnesota’s current success. Even still, it’s notable that his team is doing significantly better.

Perhaps most importantly, O’Connell’s Vikings are winning. At 6-1, the Vikings are fully in control of their playoff destiny. If they just keep winning, they’ll be looking at at least one home playoff game.

Truth be told, the reason behind a team’s success and failure is multifaceted and complex. LA’s struggles extend beyond simply losing their former OC. That being said, one does wonder if he would have helped them avoid struggling to such a degree.