Deebo Samuel to Vikings Is a Murky Idea 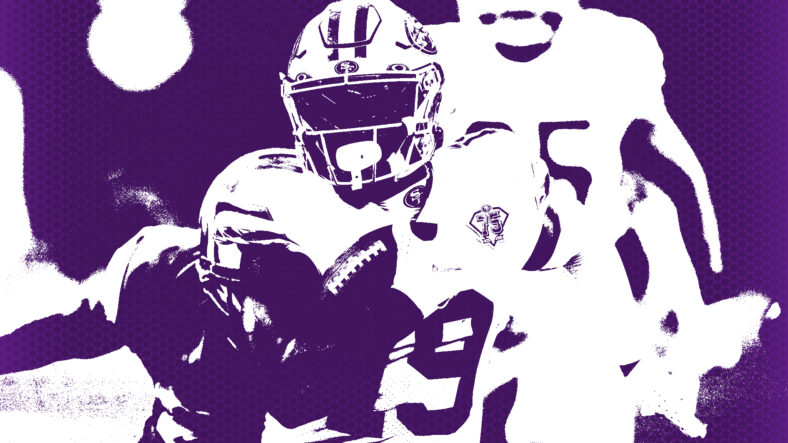 If one was playing a video game and the feasibility of the Minnesota Vikings trading for Deebo Samuel arose, hit the Accept button, and boom — good to go. In reality, though, Deebo Samuel to the Vikings is a murky idea. Video games have reset buttons or abandonment allowance; real life does not.

Of course, Samuel pairing with Justin Jefferson, Dalvin Cook, and Adam Thielen is an orgasmic fantasy, but it is not realistic.

Samuel, 26, made waves on Wednesday by requesting a trade from the San Francisco 49ers after an apparent impasse amid contract extension talks. Theoretically, he could land with any ballclub, although a trade to an NFC West team is unlikely.

For the Vikings, though, here’s the deal: they don’t have the money for it — not by a longshot.

Minnesota doesn’t even have the cap space to sign JC Tretter, who would anchor the offensive line at the center position, to a free-agent contract. How would they magically clear the books for Samuel?

Indeed, Samuel’s extension wouldn’t effectuate until the 2023 season, but that’s when Justin Jefferson’s extension talks will heat up. And if one wants Samuel for more than a single season, Samuel and Jefferson will command $30+ million per season, respectively.

NFL teams struggle to pay one elite wide receiver linked to an expensive quarterback — how will the Vikings pay two high-octane WRs and Kirk Cousins? $100 million to three players? It doesn’t work that way, unfortunately.

Otherwise, the Vikings could pivot away from Cousins when Jefferson’s fat wallet expands in 2025, but then onlookers of the team would have to hope the quarterback isn’t good enough to demand top-dollar, which is a weird request.

The only way Samuel to Minnesota could be possible would be knowledge aforethought that the franchise will not pay players like Danielle Hunter beyond this season. Why? Because Cousins and Samuel will hog the cap in 2023 and 2024, setting up the onset of Jefferson’s large batch of extension money.

The salary cap exists for a reason — for better or worse — and paying Samuel, Jefferson, and whoever the quarterback will be in 2025 isn’t conducive to roster-building.

While the Samuel-Jefferson-Cook-Thielen-Cousins fivesome is alluring to ponder, monumental and top-heavy cap gymnastics would be needed to pull it off.

It doesn’t sound like a Kwesi Adofo-Mensah special. Teams that handsomely pay quarterbacks can generally only afford one $30+ million wide receiver — if that. Plain and simple. Defensive players matter, too.