Could Gabe Brkic Win the Vikings Kicking Job in 2022?

The Minnesota Vikings went into the 2022 offseason with many needs, but for once in the past decade or so, kicker did not really seem like one of them. Greg Joseph, after a few hiccups early on in the season, jumped right into the position and did a stand-up job for Minnesota after the debacle that was Dan Bailey’s 2020 season. The assumption, especially after a season where Joseph hit nearly 87% of his field goal attempts, was that he would be back in 2022. This assumption only grew stronger when he signed his tender worth $2.4 million.

You know what happens when we assume things, though.

The Vikings turned the idea that they were satisfied at kicker on its head this week when they signed UDFA Gabe Brkic. For now, Brkic isn’t much more than camp competition to ensure that Joseph brings his A-game into 2022. But what if he doesn’t?

Keep in mind, there isn’t a position more volatile in the NFL than the kicker, and performance can devolve for seemingly no reason at all. This is something that Vikings fans are all too familiar with.

Joseph has really only played two seasons at the NFL level, and while those years have brought decent success, there have been clear struggles as well. Additionally, none of Joseph’s aforementioned tender is guaranteed. If the bad side of the 27-year-old’s play shows up in training camp, there’s a real chance that Brkic could win the job for 2022.

Who is this Gabe Brkic though? Well, to put things frankly, if Matt Araiza was the “punt god” of the 2022 draft class, it may be safe to call Brkic the “kick god”. The former Oklahoma Sooner has power in his right leg that will immediately put him in the upper echelon NFL kickers. He can nail kicks upwards of 60 yards with ease, as demonstrated by going 5-for-7 on field goal attempts of over 50 yards. This included a pair of 56-yard makes against Tulane, and honestly if you watch them, both kicks probably would have been good from 66 yards.

The power isn’t all that is intriguing about Brkic, though. He was about as consistent as it gets throughout his collegiate career. Over the course of 3+ years (he had one XP attempt during his freshman year), he went 159/160 on XPAs. He also converted on 57-of-69 of his field goal attempts over the course of his career.

Nobody is perfect, though. Like all kickers that have ever been connected to the Vikings, he certainly had his lowlights as well, including this little number that will probably give every Vikings fan PTSD.

That said, Brkic certainly shows promise, and Minnesota clearly believes he has a chance to win this job. This is evidenced by the fact that they gave him a three-year contract right off the bat. The faith is warranted given his track record and potential for a terrific NFL career.

And frankly, given the Vikings history of kickers, it makes sense that Kwesi Adofo-Mensah would want to find his own solution to a problem that has plagued the organization. We’ll see if Gabe Brkic is the long-term answer, but if nothing else, this kicking competition will be an interesting little wrinkle to follow throughout the summer. 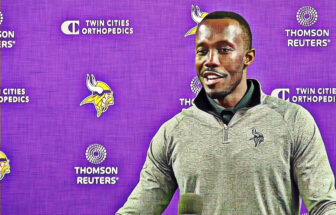