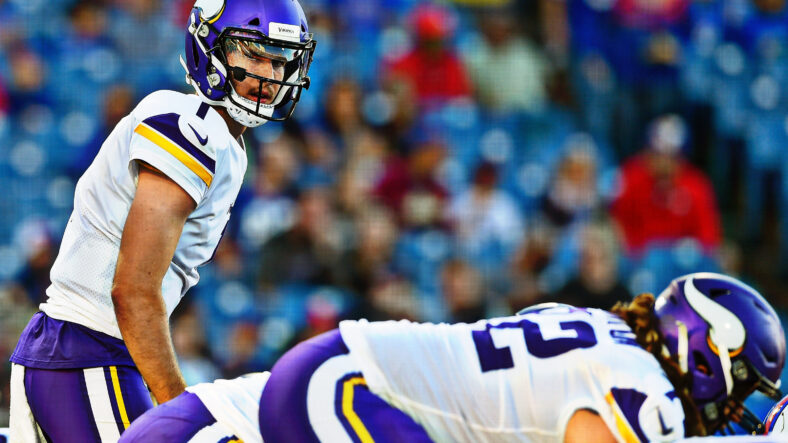 Sixty percent of the way through the USFL’s reboot season, the New Orleans Breakers hold the league’s third-best record (4-2), and they just so happen to be led by a former Minnesota Viking.

Sloter, 28, is also a frontrunner to win the USFL MVP award. Through six games — with his team in commanding playoff position — he leads the league in passing yards (1,318) and is fourth in passing touchdowns (7). Another former Viking, Case Cookus, is also making a dent in the USFL for the Philadelphia Stars, although not quite at Sloter’s pace.

Undrafted from the University of Northern Colorado, Sloter found his way to the Denver Broncos in 2017. In Denver, Sloter was tremendous in the preseason but was ultimately cut before the 2017 regular season began. After that, Sloter joined the Vikings, staying on the roster for two years. To date, Sloter has never thrown a regular season pass – in six NFL seasons – but fans absolutely insist he is misunderstood. As a preseason participant, Sloter owns an 11-touchdown to one interception split, earning a spot in Vikings lore, seemingly forever.

NFL coaching staffs never concurred with Vikings fans, though. Sloter zigzagged the league after departing the Vikings, auditioning with the Detroit Lions, Chicago Bears, and Las Vegas Raiders. Again, like the happenings with the Broncos and Vikings, he never caught on during the regular season.

Thankfully for his sake, Sloter is kingly in the USFL. His passing-yard lead over all other QBs is vast. Barring unforeseen regression, his Breakers will be the USFL’s postseason tournament. And Sloter looks the part as QB1.

The next step for Sloter and others will be to determine if USFL prosperity translates to NFL re-auditions. Truth be told, there’s probably a spot for Sloter somewhere in the NFL as a QB2.

The Breakers take on the lowly Michigan Panthers (1-5) this Saturday on FS1.

USFL playoffs are scheduled for late June, and the USFL Championship will occur on July 3rd. Sloter’s Breakers are the third most-likely team to win the championship (+320), according to oddsmakers.