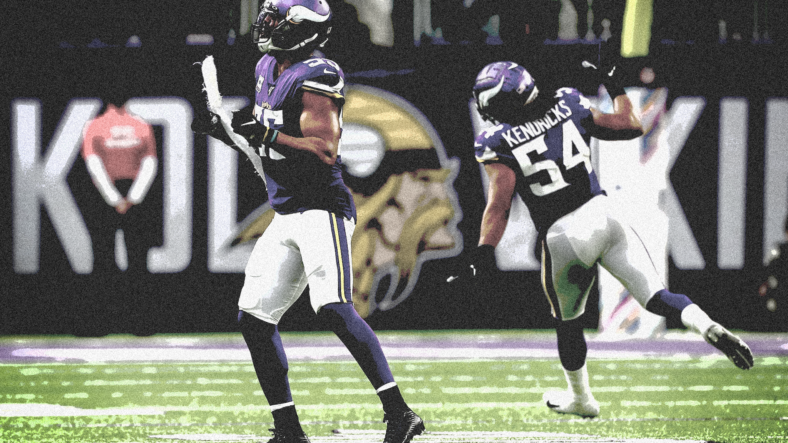 The Minnesota Vikings have oodles of decisions to make amid the impending free agency period. Free agency begins in three weeks, and these are the most impactful names in which new general manager Kwesi Adofo-Mensah must decide to retain or let walk to other NFL teams:

The list is lengthy, and this is why the 2022 roster will feel markedly different than the 2021 edition. Several of the aforementioned men will depart.

From the list, the longest-tenured Vikings are Everson Griffen (who joined the team in 2010 but left for a season in 2020) and Anthony Barr, who became a Viking the same season Mike Zimmer was hired as head coach (2014).

When the regular season finished, Barr felt like a player heading elsewhere. This week, though, new Vikings skipper Kevin O’Connell mentioned Barr by name as a player he’d like to see in his new hybrid 3-4 defense. So, the offloading of Barr was perhaps premature.

In any event, if Barr does chase bigger dollars on the open market, Bleacher Report identified the linebacker as a free agent with “bust” potential. Maurice Moton of Bleacher Report forecasted six men with the possible fate, including names like Cordarrelle Patterson and Marcus Mariota. Barr made the list, and Moton explained it this way:

“Though Barr had a decent 2021 campaign, recording 72 tackles, three for loss, 2.5 sacks, 10 quarterback pressures, five pass breakups and a career-high three interceptions, he’s probably headed for a steady decline going into his age-30 season. Teams should be wary of signing a linebacker with a ton of wear and tear on his body (6,166 career defensive snaps) while coming off consecutive injury-riddled seasons. At a non-premium position, Barr isn’t worth a lucrative short- or long-term deal.“

Indeed, Barr is aging and could encounter a decline at any moment — that’s what happens to defenders in their 30s. Yet, Barr didn’t look like a substandard player in 2021. In fact, for two games in particular, Barr created a couple of plays that should have won Vikings games — at the Baltimore Ravens and vs. the Los Angeles Rams. Unfortunately, those contests involved the vanilla brand of Vikings offense, failing to capitalize on the game-changing plays from Barr.

Moreover, Barr won’t be a humongous risk for the Vikings or another team. Pro Football Focus labels Barr as a candidate for about $8.5 million in guaranteed money for his next contract — or roughly $7.25 million per season. That isn’t cheap-cheap, but the risk is relatively low.

If Barr is not re-signed by Minnesota, the Vikings will need even more help on defense in free agency and the draft. Already, Adofo-Mensah must rebuild a defensive in rough shape on the fly if Minnesota wants to contend for the playoffs in 2022. Losing Barr would mandate another linebacker addition to the depth chart — one of the playmaking variety.

Thankfully for this cycle, several stellar rookie linebackers will be available in the draft if Barr walks.