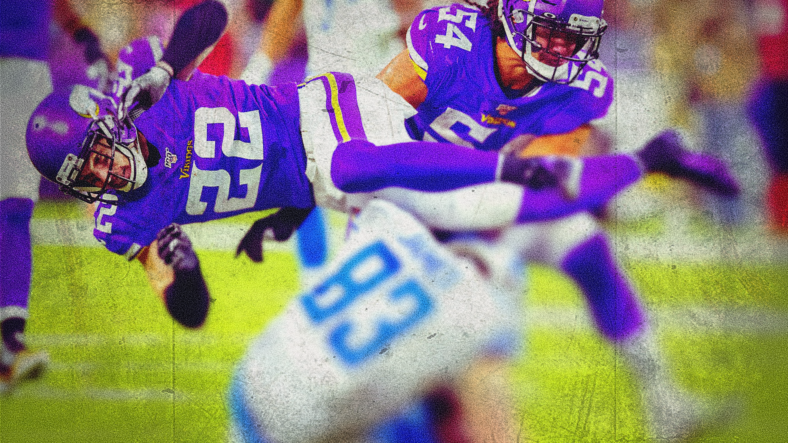 Only a handful of Vikings players and personalities are immune to criticism from fans – Adam Thielen, Harrison Smith, Zygi Wilf, and Mark Wilf. The rest, because of some reason or another, are fair game for critique.

Those men are considered stalwarts for the franchise, as others come and go via free agency, trade, and retirement. In fact, the new batch of change is scheduled for 2.5 weeks from now when free agency begins leaguewide.

And for the Vikings to participate in that event – you know, adding new players – the team must find some salary-cap space. Minnesota is underwater by $15 million, ranking as the NFL’s fourth-worst cap situation as of February 23rd.

To create cap flexibility, one of the aforementioned stalwarts could be released per Gary Davenport at Bleacher Report. That is Harrison Smith, a safety drafted by the Vikings in 2012.

If released after June 1st, Davenport theorized a Smith release would save the Vikings $11.5 million in his article about surprise roster cuts. Davenport explained the move:

“As with many of the teams in this piece, the Vikings have significant work to do where the salary cap is concerned—the team is just over $16 million in the red. Releasing Smith (and designating him a post-June 1 cut) would get the team about two-thirds of the way there. Smith is signed all the way through 2025, but given his age, the odds he’s ever going to sniff the end of that deal are remote. If given the choice, the Vikings would no doubt prefer to clear cap space by restructuring the contracts of players like quarterback Kirk Cousins and edge-rusher Danielle Hunter. Both players carry a 2022 cap number north of $25 million. But if it reaches the point where heads have to roll, the team is much more likely to part ways with a safety nearing the end of the line than an elite pass-rushing talent or its starting quarterback.”

Smith is 33, confirming the obvious fact he’s “up there” in age, But the weird part? He hasn’t really experienced a performance decline incongruent with his average annual salary ($16 million). Indeed, Smith will hit a wall soon or gradually fade away, but so far, that deterioration is menial. His grade from Pro Football Focus in 2021 was 77.9

Releasing Smith would be a shock for two reasons. a) The Vikings don’t currently have other startable safeties on the roster – let alone an impact playmaker like Smith at the position. Anthony Harris left last offseason to the Philadelphia Eagles. Xavier Woods is now a free agent who can sign anywhere. Second-year Camryn Bynum would be the last man standing if Smith was placed on the back porch. b) The Vikings new head coach, Kevin O’Connell, name-dropped Smith during his introductory press conference. Smith was the first player mentioned, making it odd for the new regime to release him after the complimentary words. O’Connell praised Smith as the perfect player to build around for what the new skipper plans for defense.

While anything is possible, a Smith release is unlikely. He’s revered. He’s productive. He’s a playmaker. He’s a team leader.

And Smith has never voiced any disgruntlement about the Vikings.