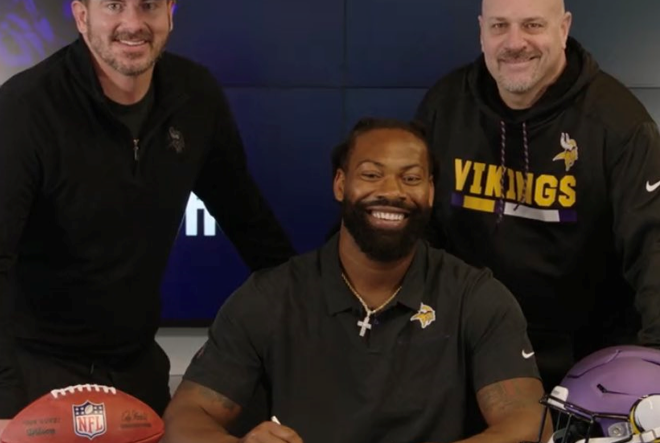 The Minnesota Vikings kickstarted a momentous offseason on January 10th by terminating the general manager and head coach in one swoop.

Rick Spielman, who worked with the team for 16 years, and Mike Zimmer, in charge for eight seasons, were dismissed, leading to the hirings of Kwesi Adofo-Mensah and Kevin O’Connell. The pendulum swung in Minnesota, and the era of defense-always, run-first football was kaput, pivoting to youth-based analytics on a bedrock of offense-first thinking.

Some Vikings enthusiasts predicted an introspective about-face for the roster, which they believed would lead to the Vikings version of a rebuild. That was mostly wrong, as the new general manager billed his vision as a “competitive rebuild” where the Vikings would compete in the now and plan for the future — just like sturdy franchises such as the Kansas City Chiefs, Pittsburgh Steelers, and New England Patriots embrace.

Notably, Adofo-Mensah re-signed quarterback Kirk Cousins, slapping an extra year on to the deal with a no-trade clause to boot. Cousins will now lead Minnesota’s offense through the end of 2023.

On Tuesday, Bleacher Report assigned every team an “offseason grade,” and for the Vikings, the mark was a ‘B.’

Kristopher Knox from Bleacher Report was hesitant to endorse the Vikings offseason with a full throat but was complimentary overall, stating, “we’ll have to wait to see if O’Connell can coax more out of an offense that oozed talent but lacked results in 2021. The overall roster is more complete than it was a year ago, however, and Minnesota stands a reasonable chance of returning to the postseason for the first time since 2019.”

The ‘B’ grade from Bleacher Report was actually quite lofty because only 10 other teams received a higher score. In Knox’s estimation, the teams conducting the best offseasons included the Indianapolis Colts, Las Vegas Raiders, and New York Jets — all with an ‘A-.’

The worst — in the ‘D’ range — were the Chicago Bears, New England Patriots, and San Francisco 49ers.

On the Vikings, the enterprise is banking on one thing being the bane of the last two years — former coach Mike Zimmer. Based on Adofo-Mensah’s preference to keep the depth chart largely intact, the working theory is that O’Connell can take the same group of men — further. Otherwise, Adofo-Mensah had a golden opportunity and greenlight to start from scratch. After evaluating the roster and salary cap, though, Adofo-Mensah seemingly doubled down on the existing roster core, thus renewing all-in stakes for the Vikings that have been present since late in the 2015 season.

‘Offseason grades’ or ‘draft grades’ are always tricky as the beholder operates on best-case or worst-case scenarios. So, the fruits of Adofo-Mensah’s decision-making will be clearer when the regular season plays out.

But, hey, at least the Vikings didn’t fire up a ‘D+’ like the divisional rival Bears.