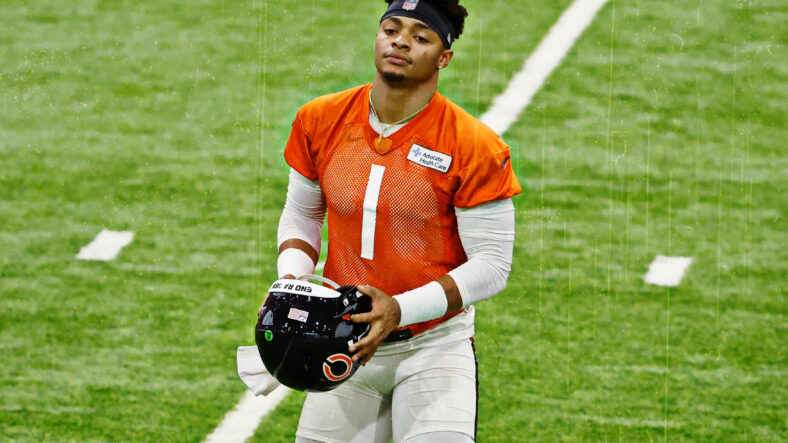 In 2021, Chicago Bears passer Justin Fields became only the second 1st-Round quarterback in the last 35 years to throw fewer than eight touchdowns in his rookie season while starting at least 10 games.

The other man was Mitchell Trubisky, who also played for the Bears for four seasons.

Still, Fields seeks to “take over” the league, although the timetable is unclear.

Darnell Mooney, the Bears #1 wide receiver, said to ESPN about Fields this week, “He wants to take over the league. He’s already Justin Fields. He wants to be the best quarterback in the league. He’s taken the stride to be there. I got unbelievable faith that he will be there, and his success is my success. So, as long as he’s doing good, I’m doing good, we’re all doing good.”

Inside the rough first season for Fields, he finished as the NFL’s third-worst passer, only besting Zach Wilson and Sam Darnold in a combined Pro Football Focus, ESPN’s QBR, and Passer Rating metric. But Fields is obviously young and can change the narrative with a solid sophomore season.

Vikings fans were extremely interested in Fields during the lead-up to the 2021 NFL Draft. Some Vikings enthusiasts were ready to neuter the Kirk Cousins experiment, endorsing a trade up the draft ladder to land Fields’ services. Rumors suggested former general manager Rick Spielman may have called the Carolina Panthers about a deal for Fields, but Spielman also could have been interested in tackle Rashawn Slater who later landed with the Los Angeles Chargers [and thrived].

Back in November, Bleacher Report‘s Brent Sobleski called the Vikings decision not to trade up for Fields the team’s “most boneheaded decision” of the year.

The Vikings play the Bears at U.S. Bank Stadium in Week 5. It will be the first time in the history of U.S. Bank Stadium that the Vikings haven’t finished their home slate of games in a season against Chicago. The Bears in Minneapolis not-in-the-winter is new.