Answers to 2 Vikings Problems Could Already Be in the House 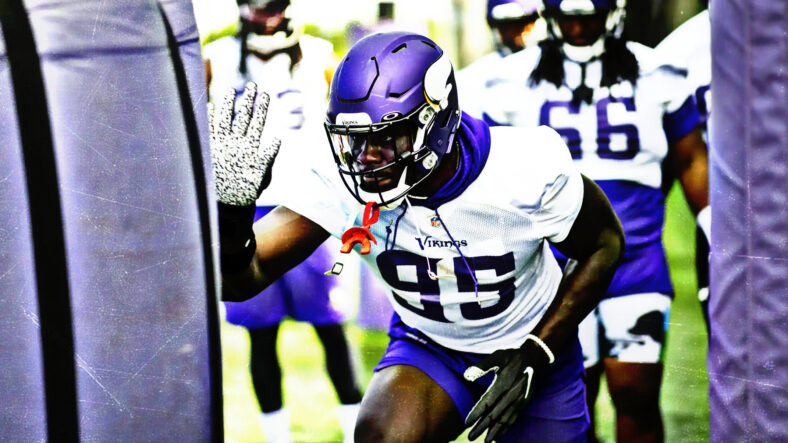 New Minnesota Vikings general manager Kwesi Adofo-Mensah, along with new head coach Kevin O’Connell, is slowly putting together their roster for their first season in Minnesota. And answers to two of the Vikings remaining problems could already be in the building.

The problems I’m referring to are interior pass rush and edge depth. The answers are Jaylen Twyman and Janarius Robinson. Both missed the entirety of their rookie season for very different reasons and will hope to impress the second time around.

The view is that the Vikings are going again with the same team. That is mainly true, with the only significant departures being veteran linebacker Anthony Barr and Michael Pierce. The former Vikings first-round draft pick is still a free agent for now, while Pierce has gone back to Baltimore.

However, the Vikings have been reasonably busy signing over 10 new players, as well as bringing Patrick Peterson back to Minnesota for a second season. The two biggest signings have been Za’Darius Smith and Harrison Phillips.

When it comes to the edge position, whether they line up as outside linebackers or defensive ends, the duo of Danielle Hunter and Za’Darius Smith are as good as you will find. However, the recent injury woes of both call for the need to have good depth options — just in case.

The Vikings have DJ Wonnum but could certainly benefit from another young potential star in waiting, which has led to plenty of draft speculation for the position, with the likes of Minnesota-born Jermaine Johnson and former Golden Gopher Boye Mafe appearing in the thoughts of experts, analysts, and fans alike. (as well as other names like Nik Bonitto, David Ojabo, and Kingsley Enagbare).

Another outside pass rusher is something the Vikings need to find. Janarius Robinson could be that guy.

The 4th-round pick out of Florida State was put on injured reserve before the naming of the 53-man roster last year, immediately bringing an end to any prospects of playing in his rookie season. Between being drafted and picking up the injury, Robinson had started to create some buzz, most notably being compared to Danielle Hunter due to them having a similar frame — both are 6’5 and around the 260 lbs mark — and mid-round picks who didn’t statistically impress in college.

An impressive athlete with speed, power, and length including noticeably long arms, Robinson was seen as the next project for defensive line coach Andre Patterson. Of course, Patterson is no longer in Minnesota. So, it is the task of new outside linebackers coach Mike Smith to unlock the talent of Janarius Robinson. He has the advantage of playing time as an outside linebacker in college. I think he will be more suited to that role than Patrick Jones and Kenny Willekes, which will give him a head start.

The signing of Harrison Phillips saw the Vikings add another strong defensive tackle who is known for his run-stuffing ability. That’s not to say that Harrison Phillips and Dalvin Tomlinson can’t put pressure on a quarterback. They can. It’s just not what they’re known for, and a genuine pass rush presence to play next to them in the front three will be needed.

Akiem Hicks has been a name mentioned in free agency, while Jordan Davis has often popped up as the Vikings first-round pick in mock drafts — a cheaper option than Hicks and without using that high-end draft capital would be preferable. Armon Watts looks to be the likely starter, but the Vikings could have an incredible story on their hands if Jaylen Twyman can come back from being shot four times last year to impact this season.

Having lost his chance to make an impact in his rookie season in the cruelest of ways, Twyman reported back to voluntary workouts fully recovered and ready to go. I was a big fan of the Twyman pick last year and had high hopes. He will be a pass rush specialist who is unlikely to see the field much on early downs, certainly this season and early in his NFL career.

Twyman has tremendous upside, despite being considered small for a defensive tackle. Reportedly 6’2 and 285 lbs, he possesses great power and explosion in his play. Back at his pro day in 2021, he did 40 bench reps of 225lbs, which would be in the 96th percentile for DTs at the Combine. For reference, Vita Vea hit 41, and Haloti Ngata got 37 on their pro days.

Playing his college football in Pittsburgh led to comparisons with fellow former Panther Aaron Donald — the player Twyman, unsurprisingly, admires. Donald has never let his smaller frame stop him and is arguably the best player in football right now. If Twyman can get anywhere close, he will be doing alright for himself. He is a player I can’t wait to see back on a football field.

Heading into the draft, Kwesi Adofo-Mensah has done a good job filling the roster with viable options. There are always players who become key players when it’s not expected. KJ Osborn was the stand-out last season. This year it could be one of Robinson or Twyman. Hopefully, it will be both.

The answers to two of the Vikings problems could already be in the building, with these two guys who have yet to have a real chance to impress.

They are two players worth keeping a close eye on throughout the summer.