A Name to Watch if Vikings Make Move at TE2 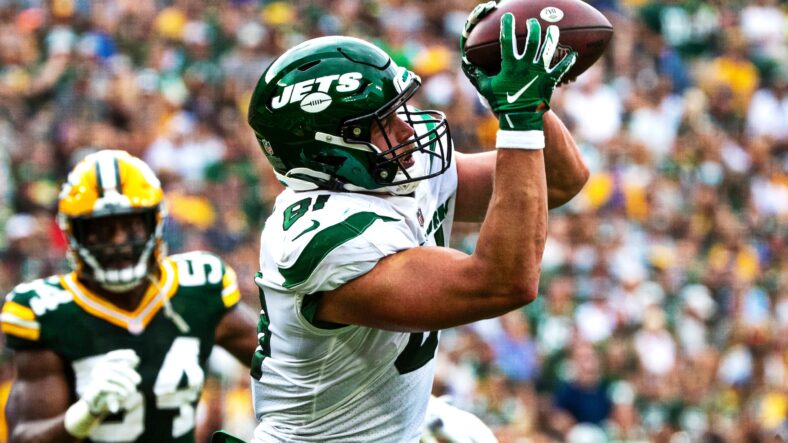 The Minnesota Vikings don’t have a weakness as of May at the tight end position, but if something happened to starter Irv Smith Jr., the outlook would instantly become grim.

Smith Jr. tore his meniscus in the preseason last summer, thrusting tight end Tyler Conklin into duty, who performed remarkably for an unsung pass-catcher. And Conklin was so good that he parlayed his production into a shiny new contract from the New York Jets during free agency in March,

Well, in return, if the Vikings want to hedge the Smith Jr. injury bet before the regular season begins, they could examine a free agent tight end from Conklin’s new team, the Jets.

He’s Tyler Kroft and is a free agent through mid-May.

Kroft was selected in the 3rd Round of the 2015 NFL Draft — three picks before Danielle Hunter — and is young enough to catch on with another NFL team. At age 29, Kroft has spent time with the Cincinnati Bengals, Buffalo Bills, and the aforementioned Jets.

He’s played in 81 career games, starting 48 of them, en route to 1,028 receiving yards and 13 touchdowns. Unless he experiences a career renaissance in his eighth season, Kroft is a true TE2, so he wouldn’t be considered a homerun signing by pundits. That wouldn’t be the goal.

But he would add depth to the Vikings TE room at a spot currently showcasing a hodgepodge of Johnny Mundt, Zach Davidson, and Ben Ellefson. Kroft did, however, score seven touchdowns in 2017 when targeted heavily in the redzone. He’s surehanded.

This is Pro Football Focus grade history by year:

Wherever Kroft signs, he’ll be an affordable addition.

If the Vikings are not interested in Kroft but still want a backup plan for Smith Jr., Kyle Rudolph, Eric Ebron, Blake Jarwin, and Jimmy Graham are also available.