A Brief History of Vikings Football in the UK 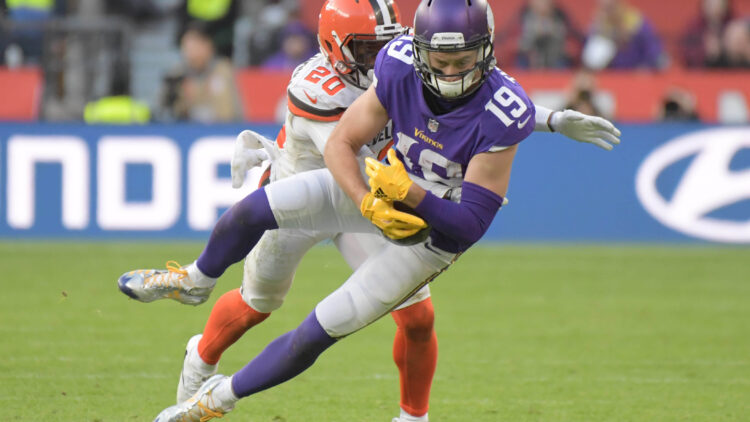 The popularity of the NFL in the UK has surged in recent years (much to my delight as a Brit who has become obsessed with the game). However, it is not a new phenomenon, and “American” football — as it is widely called over on this side of the pond — has a long history in the UK.

Of course, we now have regular season games played on British soil every year. The Vikings play the New Orleans Saints at Tottenham Hotspur Stadium on Sunday. They travel to London for the fourth time to play in what is technically a fourth different stadium. So far, they are undefeated on their travels to the UK.

Vikings Football in the UK

In 2007, the NFL brought regular season games to the UK with the international series, giving fans the chance to experience the real thing. The Vikings first came over in 2013, beating the Pittsburgh Steelers 34-27 at the New Wembley Stadium, and followed that with a 33-16 win over the Cleveland Browns at Twickenham Stadium in 2017.

Altogether, the Vikings have played six overseas games and have won them all.

Sitting with a 2-1 record, another victory in London will result in their best start to the season after four games since 2016.

Tickets for the games, which now also include a game in Mexico and Germany, are highly sought after. The games have a strange atmosphere, with fans of all the teams in the league flocking to the stadiums to get a taste of a genuinely competitive game. However, the Vikings will be well supported by a strong fanbase that continues to grow across the UK and Ireland.

Hard work by the Vikings organization in conjunction with the UK supporters club saw the Vikings named as one of the franchises to have an international home marketing initiative in the UK. This puts the franchise at the forefront as the game continues to grow in Great Britain.

The organization’s presence is already being felt with the Vikings cheerleaders meeting fans amongst events that have been set up. Perhaps most exciting is the Skol bus doing the rounds in London. That’s certainly going to make an impression on the general British public!

The team will look to maintain their international winning streak with a victory over the Saints on Sunday. If they do so, it’ll be another successful trip overseas for these Vikings.