5 Biggest Storylines for Vikings after Draft 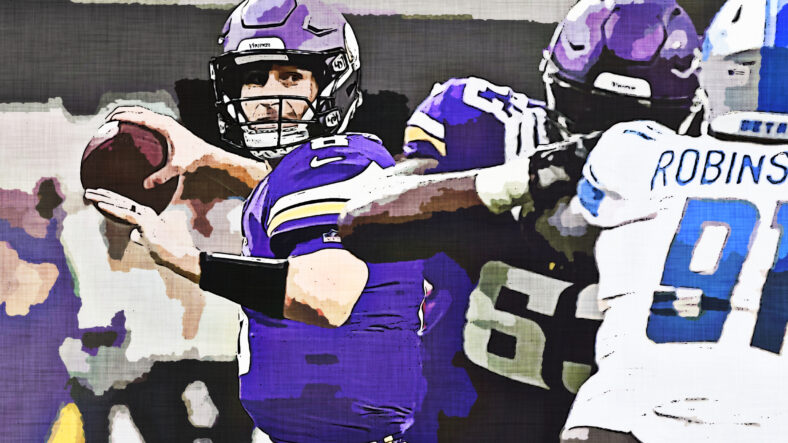 Now, the offseason resumes as several free agents remain available on the open market and training camp begins in a couple of months.

These are the five biggest questions facing the Vikings, following a draft that answered a few.

The Vikings haven’t experienced reasonable and consistent RG play since 2017. Josh Kline was productive for a minute but mysteriously never returned after 2019.

Jesse Davis was a regular starter in Miami but wasn’t all that good despite oodles of playing time. Wyatt Davis is one of the biggest Vikings mysteries of the decade — is he actually any good? Ed Ingram was just controversially chosen in with 2nd-Round draft capital. Chris Reed would have the most impressive resume if Ingram didn’t exist. And Udoh is a penalty magnet.

On paper, this should come down to Reed vs. Ingram. Once and for all — will the Vikings have decent output from a right guard?

Otherwise, they drafted Nick Muse in the 7th Round last week, a flamboyant TE prospect from South Carolina.

If not Mundt, Muse, or Zach Davidson, free agents like Jimmy Graham, Eric Ebron, or the aforementioned Rudolph are unsigned.

Overall, no clear TE2 is unfamiliar territory for Vikings fans, dating back to arguably 2018.

And it’s not just tight ends that could be explored.

JC Tretter has been a free agent for almost two months, and he’s one of the best pass-protecting centers in the world. Why on earth is he unsigned? Tretter is better than Bradbury — by a mile — so the Vikings could reasonably get better in the trenches if they signed the former Cleveland Brown.

If these Vikings genuinely consider themselves Super Bowl contenders, why not free up cap space with the contracts of Eric Kendricks and Dalvin Cook to create a deeper depth chart?

4. Will Cousins Finally Have a Normal OL?

It’s a crime to surround Cousins with leaky pass protection while singularly focusing on run blocking as the emphasis. Cousins is a pocket passer, and historically, pocket passers need time to throw the ball. The Vikings offensive line rarely does so for the QB1.

Some folks blame Rick Spielman and Mike Zimmer for the OL problems, which is probably a wise source. For five straight years, the Vikings have drafted offensive linemen with 2nd-Round-or-higher picks.

Is 2022 — with a new offense-first storefront — finally the year Cousins receives at least average time in the pocket?

5. Are the Defensive Woes Over?

The number-one-with-a-bullet reason for the Vikings recent bouts with mediocrity is trashy defense. With the snap of two fingers after the 2019 season, Zimmer’s vaunted defense died. It flatlined.

Last week, the draft was used to revamp the defense, adding men like Lewis Cine, Andrew Booth, and Brian Asamoah to the mix. Minnesota is switching to a 3-4 defense with Ed Donatell in charge.

The defense must be around 16th-best or higher in the NFL for the Vikings to earnestly contend for a Super Bowl, which is — they claim — their goal.

Will the transformation to a 3-4 from 60 years’ worth of 4-3 defense profit for the franchise right away?