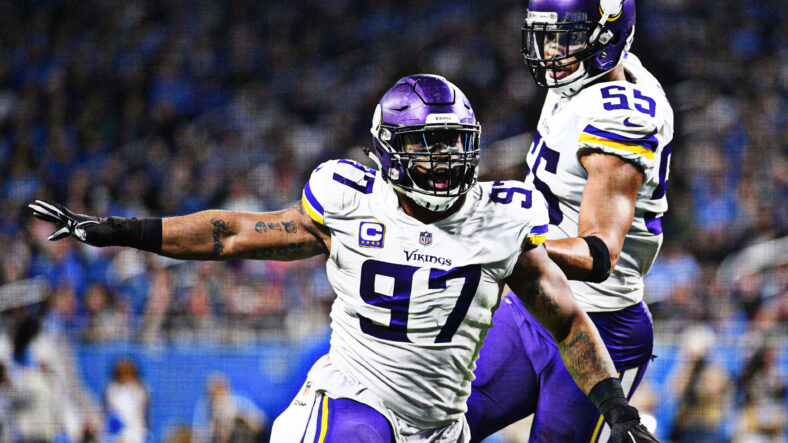 The 2021 Minnesota Vikings defense was a curious creature, ranking as the NFL’s 12th-best defense via EPA/play but allowing the most points in the final two minutes of halves of any football team in 20+ years.

And as of May 25th, four defensive starters from the 2021 Vikings remain unemployed.

Among the Vikings largest offseason mysteries is Barr’s status as a free agent. Most onlookers of the Vikings expected Barr to sign with another team in March, but he did not. He’s been curiously unsigned for over two months.

His health may be suspect, particularly a bad knee. Yet, at age 30 and with four Pro Bowls to his name, if Barr is not suffering from a career-ending injury, the linebacker should be sought after by some NFL team.

The rumor mill has suggested the New York Jets and Dallas Cowboys as landing spots if Barr is indeed healthy.

Barr produced a commendable 2021 season, making magnificent, potentially game-winning plays in games versus the Baltimore Ravens and Los Angeles Rams. But the Vikings coughed those opportunities away.

Griffen’s lingering free agency is more understandable. He stepped away from the Vikings in the middle of the 2021 season to get his mental health right — an admirable plan for any human being.

But in terms of his future playing career, the rumor mill for Griffen has been arid. His old defensive line coach and co-defensive coordinator, Andre Patterson, now coaches the defensive line for the New York Giants. Griffen could land there, but that is merely speculatory.

Griffen proved in 2021 that he can still effectuate quarterback pressure, acting as the Vikings only arbiter of pocket chaos after Danielle Hunter was lost for the season in October.

However, Griffen will be 35 this December, so this could be the end of the road for the USC alumnus.

Richardson had two separate stints with the Vikings — in 2018 and 2021. Both times, Minnesota lured him in with promises of Super Bowl contendership and then finished the season with mediocre records

Mike Zimmer even used Richardson as a defensive end last year, a departure from his normative role as a three-technique defensive tackle. As an EDGE rusher, Richardson played quite well.

Of the four men listed in this mini-analysis, Richardson is the most likely to sign somewhere.

Breeland was nominated to start at cornerback over Cameron Dantzler in 2021, and nobody really knew why. He flat-out wasn’t very good, had spats with reporters, and was ultimately cut by the Vikings for a practice brouhaha.

Even though his Vikings tenure ended messily — and was even downright vulgar at times — Breeland will probably sign as a CB4 with a non-Vikings team this summer.