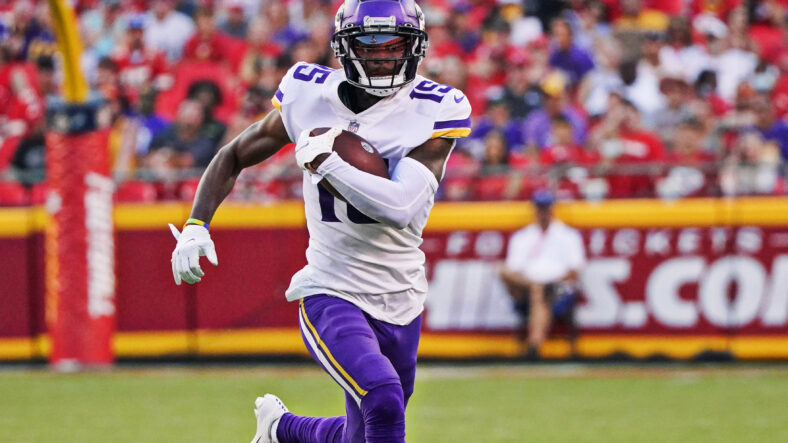 Thanks to Miami alumnus K.J. Osborn, the Minnesota Vikings no longer have to speculate who might finally become the franchise’s WR3. Osborn burst from a quiet 2020 cocoon last year to seize the Vikings WR3 gig and doesn’t figure to relinquish it.

He notched 655 receiving yards, far and away more than a Minnesota WR3 had produced in over a half-decade. So, now what? Well, fans await the emergence of a WR4 with the third wide receiver job all but decided.

And according to NBC Sports EDGE, that battle will include second-year WR Ihmir Smith-Marsette and rookie Jalen Nailor from Michigan State.

The team also has free-agent signee Albert Wilson on the roster, but it is unclear if Wilson will be tapped for WR4 duty. He may be a better weapon for punt returning or WR5 duties.

Regardless, the job in mid-July is probably Smith-Marsette’s to lose. He was accountable for an impressive career at the University of Iowa, and when Smith-Marsette showed glimpses of promise at the end of 2021, Vikings fans felt vindicated in forecasting “big things” for the rookie. His teammate, the aforementioned Osborn, did nothing as an offensive weapon during his rookie season, so it already seems like Smith-Marsette has a headstart.

Pat Kerrane of NBC Sports EDGE said about Smith-Marsette’s sights on WR4, “Ihmir Smith-Marsette looks like the favorite for the job after a solid rookie season as an inside/outside deep threat.”

The competition, though, will come from Nailor, who has a reputation as a big-play threat from his days at Michigan State. In his final season as a Spartan, Nailor averaged 18.8 yards per reception — an intrepid number if he could find a way to wiggle it into the Vikings 2022 plans. Smith-Marsette is certainly capable of playmaking, but the “upside” of Nailor might have the edge.

“Nailor profiles as a similar type of player [to Smith-Marsette], and he should be in the mix for the fourth receiver role in camp,” Kerrane opined.

The WR4 mystery is particularly noteworthy because the Vikings shift to a new offense in 2022. Most of the players are the same, but Mike Zimmer no longer leads the enterprise. Instead, Kevin O’Connell will navigate the 2022 season as a first-year head coach, perhaps hellbent on throwing the football more. And if O’Connell does throw the ball more, the importance of WR4 escalates. Third and fourth wide receivers don’t have to be footnotes in Minnesota’s offense, a philosophy change marked by the end of Zimmer’s run-first approach.

If NBC Sports EDGE is wrong altogether, Bisi Johnson and Albert Wilson would love to supplant Smith-Marsette or Nailor for the WR4 job.

Fans can join Vikings training camp on July 30th in Eagan for an intimate look at the competition.