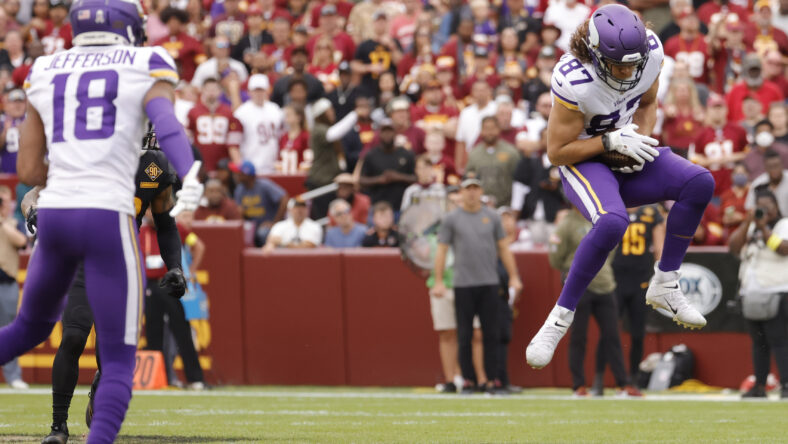 First-year general manager Kwesi Adofo-Mensah has added some nice pieces via free agency since the Minnesota Vikings gave him the keys to the franchise after moving on from Rick Spielman after last season.

Adofo-Mensah did not stop there though. At the trading deadline he brought in former Detroit Lions tight end T.J. Hockenson.

In only two games with his former rival, Hockenson is already making his presence felt. He’s aught 16 passes for 115 yards. He and Kirk Cousins have already developed nice chemistry, especially on third-down plays.

Minnesota has won these past two games by a combined six points. Six. Without him, they very likely do not win these past two games. He is already making his prescence felt. This has already looked like a great move. Even when he is not catching passes, he gives defenses another player to worry about.

With Irv Smith Jr injured and not playing as well as he did in 2020, Minnesota needed another weapon. Adam Thielen also is still good, but on the decline right now. K.J. Osborn has not performed as well as expected either.

Justin Jefferson is of course one of the best wide receivers in the game if not the best, but adding another weapon like Hockenson helps tremendously. Defenses will of course still make him their main focus, but Hockenson allows Jefferson to get a little more single coverages.

Next season Hockenson is under contract for $9.329 million and maybe the Vikings could get him extended in the offseason. Having him for years to come would make this trade that much better.

Even if he had eight receptions in two games with his new team it would have been a good start. The fact that he doubled that is very impressive. He is still getting up to speed with his new teammates and coaches.

The Hock is off to a great start as a Viking. Can he keep it up? If he does, this team and its fans will have more reasons to be optimistic the rest of the way.