Reactions after Vikings get a critical win in Chicago 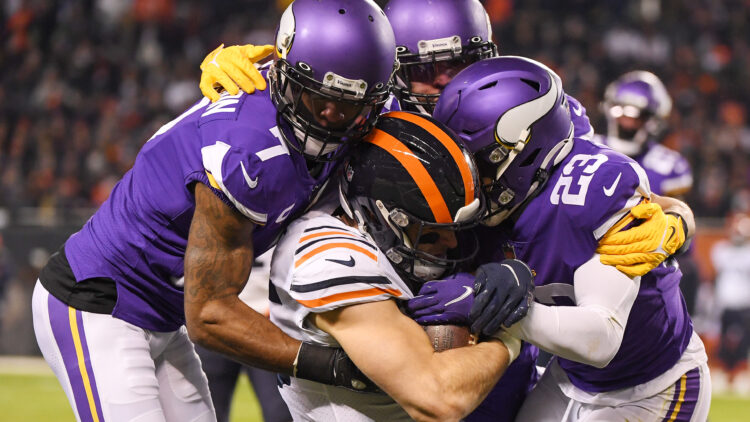 Four weeks ago the Vikings beat the Packers 34-31 in an exciting back-and-forth divisional battle full of offensive fireworks. On Monday night, Vikings gained a necessary 17-9 win over their other arch-rival—the Bears—in a mistake-filled (mostly by Chicago), old-time Black-and-Blue division defensive struggle that hardly could be called exciting.

Bottom line—they’re both the best kind of victories, in the NFC North, and they count the same—a W, which is all that matters. After all the close games this season, it was nice—and relaxing for the Vikings and their fans–to experience a 14 point lead late in the fourth quarter. And as I’ve often said, there’s no such thing as an ugly win in the NFL, especially in a division road game.

I thought it would be a difficult night for the Minnesota offense to win once I saw that Vikings-killer Akiem Hicks was coming off an ankle injury to play for the first time in a month along with Chicago’s leading tackler Roquan Smith (hamstring). Throw in the fact that Adam Thielen’s ankle was not yet ready for prime time and the game was in cold Soldier Field (a difficult place for the Vikings over the years) so I figured it would be a struggle offensively even with the Bears secondary missing all four starters due to Covid.

So the onus was on the Minnesota defense to play better than they have lately and make things difficult for rookie QB Justin Fields. Fortunately for their playoff lives, the Vikings D delivered their best performance of the season during the win, forcing three turnovers and stopping the Bears three other times on downs. Dalvin Cook fought hard for 89 rushing yards on 28 carries and on the rare occasions that he wasn’t being pressured by Hicks and Robert Quinn (two sacks each), Kirk Cousins was able to throw two touchdown passes.

At 7-7, the Vikings are in a battle for the final NFC playoff spot with New Orleans and either Washington or Philadelphia heading into a day-after-Christmas matchup with the L.A. Rams. It will be a game that Mike Zimmer and Company would gladly take another win—in whatever fashion.

Here are my other reactions to this critical Vikings win in Chicago:

1.Defensive ends D.J. Wonnum and Sheldon Richardson were great replacements for Danielle Hunter and Everson Griffen in Chicago: Wonnum had the best game of his two-year career with three sacks and showed athleticism like Hunter in chasing down the elusive Fields. Richardson has been a great bargain signing for GM Rick Spielman at $3.6 million for this year as he’s played very well at defensive end (his usual spot is defensive tackle). He had 3 tackles, 1 sack, 2 QB hits, a forced fumble and fumble recovery in the game.

The Vikings had a season-high 22 pressures against Fields while blitzing him only nine times so the D-line including the defensive tackle group was outstanding. It’s quite the achievement that the Vikings still lead the NFL with 44 sacks despite missing Hunter and Griffen for an extended period.

2. Good riddens, Bashaud Breeland: he was an inconsistent and unreliable corner for the Vikings prior to being cut after an incident at practice last Saturday. Cam Dantzler is shaky and his focus can be lax (as in the final play at Detroit) but his upside is much better than Breeland’s as he showed in stripping Fields on an option run, setting up a second quarter field goal. Dantzler will need help from the safeties when he’s challenged by the Rams’ and Packers’ great receivers the next two weeks.

I also thought Patrick Peterson was excellent on Monday night including his two successive pass breakups on a key fourth quarter red zone stop for the defense.

3. Even without Khalil Mack, the Chicago front seven on D is imposing: see above regarding Hicks, Quinn and Smith which leads us to #4—oh-oh, the Vikings offensive line that did not adequately protect Cousins who threw for a career-low 87 yards but got the win.

4. O-line concerns with Aaron Donald up next: I thought the offensive coaches had a poor plan for handling Hicks and Quinn. Right guard Mason Cole was overwhelmed most of the night by the bigger Hicks when he was on the field (Cook’s best runs came when Hicks took a break). Couldn’t the Vikings coaches scheme more double team blocking on Hicks knowing his history of excellence against Minnesota? Or perhaps the more massive Oli Udoh would’ve had a better chance against Hicks in Chicago and in the season finale at home in three weeks.

Rookie left tackle Christian Darrisaw also was left with no chipping help too often against Quinn who now ranks second in the league with 16 sacks. The coaches must come up with a better plan against Donald, the reigning NFL Defensive Player of the Year, who had 10 sacks and 61 tackles headed into Week 15 and Floyd, the former Bear edge rusher who had 8 sacks along with recent acquisition Von Miller. More play action passes would help as long as Cook can be effective on the ground to set up play action.

5. Gritty Cook: He didn’t see the kind of holes that enabled him to torch the Steelers for 205 rushing yards last week but he showed great toughness as he was pounded by the Chicago D. And his teammates love that he didn’t back down to the trash talk and pushing/shoving as Hicks tried to intimidate him.

6. Chippy game and poorly officiated: lots of bad blood and a few mini-punches thrown in an emotional win that featured the Bears losing their cool more than the Vikings so Zimmer deserves credit. Four personal fouls were called on the undisciplined Bears including one on Coach Matt Nagy who was incensed at a helmet-to-helmet call on Devin Bush against Tyler Conklin that kept a drive alive leading to a second quarter field goal and a 10-0 Minnesota lead.

The officiating was awful and both teams had a right to be upset. Chicago was angry with a shaky third quarter low block call (on an attempted tackle) on 3rd-and-18 that gave the Vikings a first down enroute to their insurance TD for the win. Cousins’ second quarter interception was caused by Jefferson being held and tackled on an obvious penalty that wasn’t called. And Richardson’s forced fumble on David Montgomery had to be confirmed by a Vikings challenge and it could’ve been a scoop and score for Richardson if it was called right on the field.

6. The Vikings really need Thielen to make this playoff push: Minnesota was 5 of 17 on third down conversions showing how much they miss one of their top playmakers and chain-movers. When Thielen returns, Justin Jefferson will still attract a lot of double coverage but Thielen is such a big part of the Minnesota offense especially on third down and in the red zone and he opens things up for Jefferson, K.J. Osborn, Tyler Conklin and Cook. It’s obvious that Cousins is a more confident QB when Thielen is in the lineup with Jefferson.

1.The New Orleans upset victory at Tampa Bay was damaging to the Vikings playoff hopes: the Saints’ remaining games are home against Miami and Carolina and then closing at Atlanta. It’s seemingly a much easier finish than the Vikings who still must go to Green Bay on January 2 (brrr!) and close with the Bears after hosting a Rams team fighting for the NFC West title. But the Saints have been up-and-down and the Dolphins have won six straight while the Falcons won in New Orleans earlier this season so it won’t be easy for the Saints to win all three games.

Meanwhile Philly and Washington have another matchup on January 2 and both face Dallas down the stretch along with very winnable games against the lowly Giants so a sweep down the stretch is unlikely for either team.

It’s of course wishful thinking but if the Vikings had just finished off wins at Arizona and Detroit, they’d be sitting at 9-5 and cruising to a playoff spot.

2. Re: Urban Meyer: he was a bad hire in the first place by clueless Jaguars owner Shad Kahn who fired him last week. Time for Meyer to go back to a college job where he can run roughshod over everyone which doesn’t work in an NFL that requires much better people skills from head coaches.