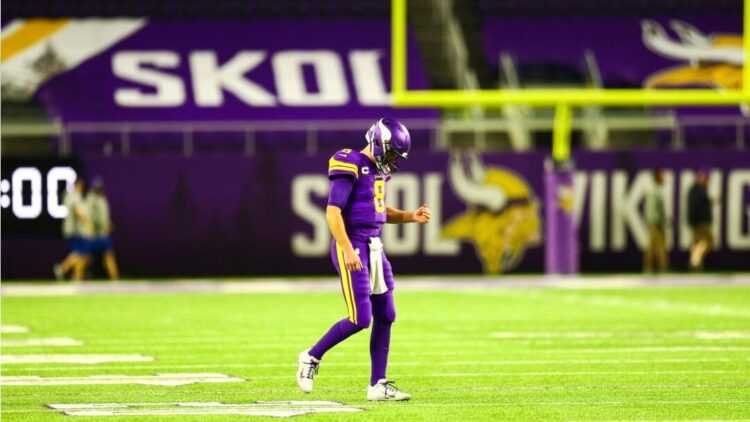 As the Minnesota Vikings are embroiled in probably-fake trade talks surrounding Kirk Cousins, wide receiver Justin Jefferson remains an ardent supporter of his quarterback. In a two-week period when Deion Sanders, Sage Rosenfels, and Ian Rapaport questioned the legitimacy of Cousins’ game, the 32-year-old quarterback received a ringing endorsement from his leading wide receiver.

Cousins and Jefferson clicked marvelously in 2020. The LSU alumnus tallied 1,400 receiving yards during his rookie campaign – an NFL record for a first-year pass-catcher. After a couple of weeks settling into the Vikings offense, Jefferson also chipped in seven touchdowns throughout the season. All told, Cousins delivered 35 strikes for touchdowns in 2020 – sixth-most in the NFL.

The Vikings will hope to rebound after a 7-9 season that was plagued by unusually porous defense. Clean bills of health for essential defensive personnel like Danielle Hunter and Anthony Barr will help. Minnesota also must nail its free-agency agenda and capitalize on the 2021 NFL Draft as the team did in 2020 with Jefferson’s selection.

On the Cousins-Jefferson relationship, that bond appears to be a peachy one. This should be self-evident for a WR-QB tandem that just set an NFL rookie record, but naysayers relish subtracting all sorts of kudos from Cousins. It is relentless.

But for the on-the-field stuff, Cousins and Jefferson are tight.

Jefferson hopped on Jim Rome’s podcast this week for a chat. Amid the conversation, Jefferson made it clear that Cousins was the right man to lead the Vikings:

“He definitely takes a lot of heat, he takes way more heat than he really deserves. If you look at the numbers he’s on the top of the league. He’s been doing a lot of things for this team and for this offense. I don’t really understand why he gets so much criticism. All of those losses that we had wasn’t on him. Of course, we’d like to take some plays back and redo some plays but that’s just how it is. You don’t play perfectly, especially in this league, and to see the things that he has done I really don’t know why he gets so much criticism. He’s the reason why I had 1,400 yards.”

So, who do you trust to adjudicate Cousins’ abilities as a passer? Your buddy from eighth grade that says Cousins stinks because he watched a game against the Indianapolis Colts last year – or the person with the helmet on that set an NFL record with the man? It’s a tricky one.

Last Week, Deion Sanders Did the Opposite

Announcing that a quarterback that tossed 4,265 passing yards and 35 touchdowns during a season – is actually quite good —  is a bizarre responsibility. If Kyler Murray or Baker Mayfield accomplished these feats, way-too-soon Hall of Fame chatter would tickle radio airwaves.

The standard is different for Cousins. When he leads a game-winning drive, the narrative inexplicably rotates to, “What time of the day was the game?” He authored those 35 touchdowns in 2020 – and trade-him-for-Garoppolo confabulation still arises.

This happens due to comments such as those made by Deion Sanders last week. In interviewing Justin Jefferson on NFL Network, Sanders disclosed that he “was not a fan” of Kirk Cousins’ game, although he loves Mike Zimmer.

Cousins is not offered a widespread endorsement from former NFL players or analysts. Tony Romo from yesteryear was scrutinized similarly but not quite like Cousins.

Also floating in the realm of inaccurate talking points is the idea that Stefon Diggs forced his way out of Minnesota “because of Kirk Cousins.” This narrative is false.

Stefon Diggs – with his own lips – squashed the fallacy:

“Kirk was one of the first guys to text me. He was super appreciative of the time we spent together over the last couple of years, and he was just as encouraging, wishing me the best of luck in Buffalo. And it’s like, what do I even say about Kirk? This is a man who has invited me into his home. Introduced me to his family. Put in the extra hours with us. He’s a guy who, through all the ups and downs over the last couple of years, I’ve developed a tremendous amount of appreciation and respect for. I’m definitely going to miss playing with and learning from him.”

And this is why Jefferson championing Cousins is newsworthy. The falsehoods pertaining to Cousins are plentiful and inescapable. When the budding face of the Vikings franchise [Jefferson] weighs in, folks listen. Two prolific wideouts in a row — Jefferson and Diggs — exalting Cousins in separate forums.

Maybe this guy is actually good?