Borman Breakdown: Christian Darrisaw Situation Is Cause for Concern 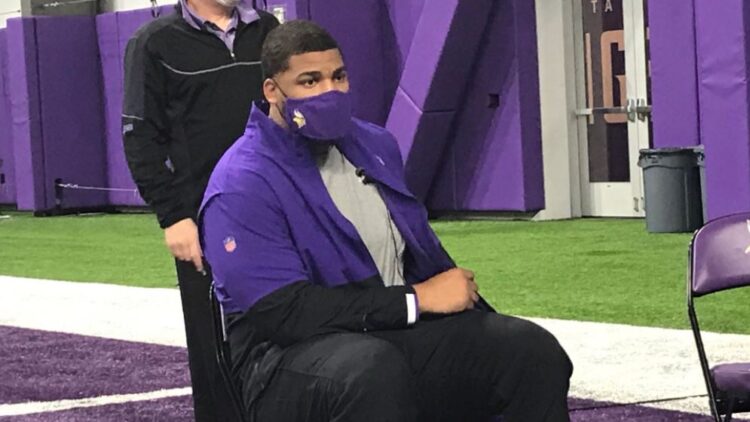 The 2021 first-round pick underwent a “minor core-muscle procedure” on August 12th to fix issues that stemmed from a January operation. The original surgery was meant to repair a nagging injury to his core/groin area.

“What I’m hearing is that Darrisaw’s injury, at the very least, is going to limit him and nag him all year. I just don’t know if he’s going to be a factor this year,” said Star Tribune columnist Jim Souhan on his Talk North podcast.

On VikingsTerritory’s Breakdown podcast with Joe Oberle, Souhan’s colleague, Mark Craig, went so far as to call it a “lost season” for Darrisaw.

“It’s going to be a while for him. I’m already thinking it’s a lost season because you just don’t put him in Week 5, Week 6 or whatever,” said Craig. “So your left tackle is Rashod Hill.”

Craig interviewed Vikings’ head coach Mike Zimmer for his season preview article that published on Sunday in the Strib. During the interview, Zimmer lumped Darrisaw in with Jeff Gladney, Mike Hughes, and Laquon Treadwell as first-round picks that haven’t worked out or have been “lost.”

“That stuck out like a sore thumb to me,” said Athletic writer Jon Krawczynski, who joined Souhan on his podcast. “This looks like something that if he’s going to be able to play, maybe this limits him, or maybe this even affects if he’s going to be able to play much this season. If Zim’s already talking about that, that says there’s more to this than, ‘okay, he’s back from the groin injury, now he’s ramping up, and he’ll be fine.’ I think that there’s real concern that he will not be.”

Another media member told me that two surgeries in one year are cause for concern and that Darrisaw’s conditioning has a ways to go as well.

“Can’t write him off for the whole year, but not like I have huge expectations for him this year,” the person said.

Darrisaw participated in individual drills in practice last week but has yet to join any team activities.