Podcast: Chuck Foreman on How Norse God of War Odin Once Helped the Vikings Win – 12 Minutes 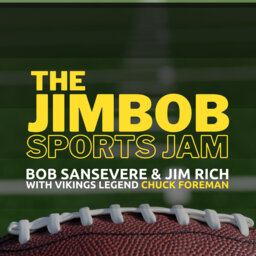 On Sunday, the Vikings will have a video tribute to Odin, the Horse god of war, and the role he played in helping the team win in a bygone ear.

In this segment from the JimBob Sports Jam, Vikings legend Chuck Foreman tells his version of the story and how fans at the old Met Stadium would begin to chant when the sun started to go down, “Odin! … Odin!”

It was their ode to Odin, and, sadly, nowadays that the Vikings play indoors such a chant may not work, according to Foreman.

Check it out here at vikingsterritory.com.

You can listen to the entire JimBob Sports Jam at thebsshow.net as well as on most popular podcast platforms.

The JimBob Sports Jam also can be heard on radio stations across Minnesota, including in Duluth (KDAL), Mankato (KTOE) and St. Cloud (WBHR).