Vikings could go on a tear soon 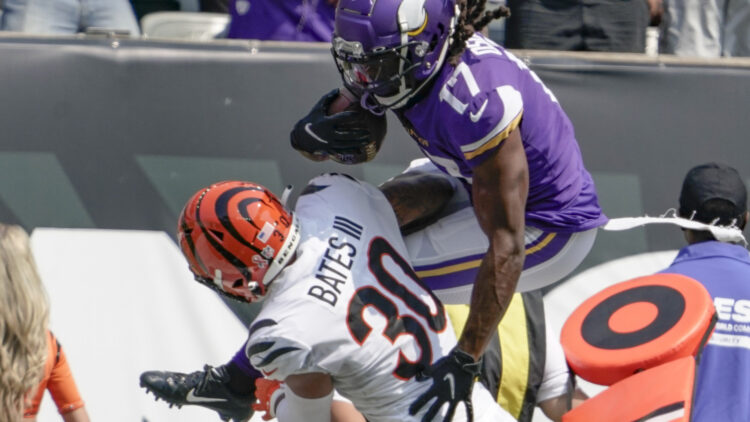 Minnesota Vikings wide receiver K.J. Osborn (17) tries to go over Cincinnati Bengals free safety Jessie Bates (30) as he runs after making a catch in the first half of an NFL football game, Sunday, Sept. 12, 2021, in Cincinnati. (AP Photo/Jeff Dean)

It has been a very disappointing start for the Minnesota Vikings no doubt.

They are 0-2 and have lost by a combined four points. That is very tough to swallow. They could easily be 2-0. Even being 1-1 would not have been bad. Whether Dalvin Cook really fumbled or not in week one, the Vikings still made way too many mistakes. 12 penalties is very unacceptable.

Last week at Arizona they just needed a 37-yard field goal to win. Not 47. Not 57. But 37. Defense did not play well once again, but they did record two interceptions in the second half and made some stops at the end. Mike Zimmer’s decision to squib kick at the very end of the first half later led to a 62-yard field goal by stud kicker Matt Prater. Despite those mishaps, Greg Joseph still should have made that kick, along with an extra point in the second quarter.

Some fans already think the season is over. If they lose today at home to the Seattle Seahawks, you can make a strong case that it is over. If they also lose the next week to the Cleveland Browns and fall to 0-4, then absolutely the season is lost. Very very difficult to come back from that. Prime Randy Moss, Cris Carter and the old Purple People Eaters are not going to walk through the door and save them if they start 0-4.

The Seahawks are a very good team and are 7-0 against the Vikings since they drafted Russell Wilson, but maybe the eighth time will be the charm. There are no guarantees in this league, especially when you are 0-2, but the Vikings still have a great shot to win this game. They nearly won at Seattle last year. Maybe this time they not only win, but win convincingly.

Four of the next five games will be at U.S. Bank Stadium. The road game will be at Carolina and although the Panthers are 3-0, they will be without star running back Christian McCaffrey. Winning five in a row is never easy in any sports, especially in football. The Vikings could perhaps win these next five games. They could also go 4-1, 3-2 or maybe even worse. Time will tell. One thing is for certain though. This team needs to turn it around quickly or else they could be headed for a disastrous season.

Cook said earlier in the week that they could go on a tear. They very well could.

Some other reasons for optimism going forward have been the return of Danielle Hunter and Michael Pierce, the play of Kirk Cousins, Nick Vigil and the resurgence of second-year wide receiver K.J. Osborn. The play of the defense is a concern no doubt, especially Bashaud Breeland and while they have not been as good so far as they were expected, they should improve going forward. Things cannot get worse and there is plenty of talent on the defense.