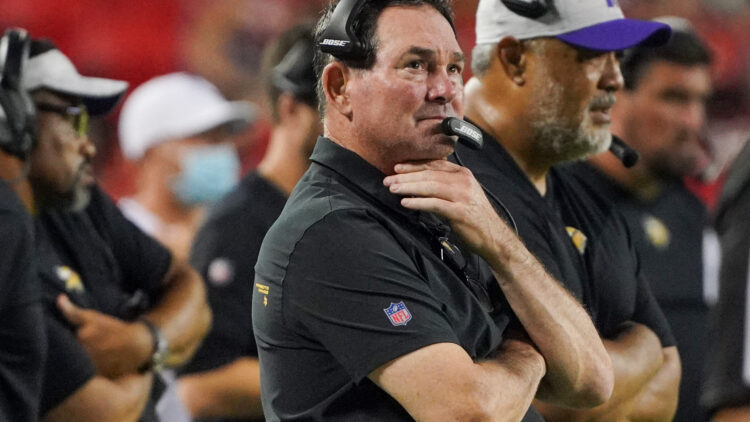 Some Vikings fans were howling that Mike Zimmer should be fired after what happened in Cincinnati.

Zimmer may deserve firing, but it’s unlikely to happen during the season.

Ordinarily, a coordinator is elevated when a coach is fired with games still to be played.

Yep, he’s definitely a possibility, but the more likely scenario is making a phone call to Gary Kubiak, Klint’s old man, and pleading with him to finish out the season as coach.

Gary Kubiak was the offensive coordinator last year and won a Super Bowl as the head coach in Denver, so he certainly is qualified. The question is, would he do it? He wanted to get away from football, but if it means helping his son keep his job, he might just agree.

Item 2: The Vikings could start out 0-4 with games coming up against Arizona, Seattle, and Cleveland. All three teams have solid defenses, and all three have receivers who can torch Bashaud Breeland the way Bengals wideouts did.

It could get real ugly for left tackle Rashod Hill over the next few games. Sunday, he faces Chandler Jones, who had five sacks against Tennessee’s three-time Pro Bowl left tackle Taylor Lewan. And Cleveland has a defensive end in Myles Garrett, who might be better than Chandler.

Hill will need help. It might be time to get behemoth defensive tackle Michael Pierce to line up as a wall on Kirk Cousins’ blindside to help protect the QB once the likes of Jones and Garrett blow past Hill.

Item 3: In case you missed this uplifting factoid about the Vikings, they’re technically in first place in the NFC North because all four teams in the conference lost Sunday, and the Vikings have a tiebreaker edge.

“Purple Pulpit” can be heard and downloaded on the Vikings Territory website as well as most popular podcast platforms.