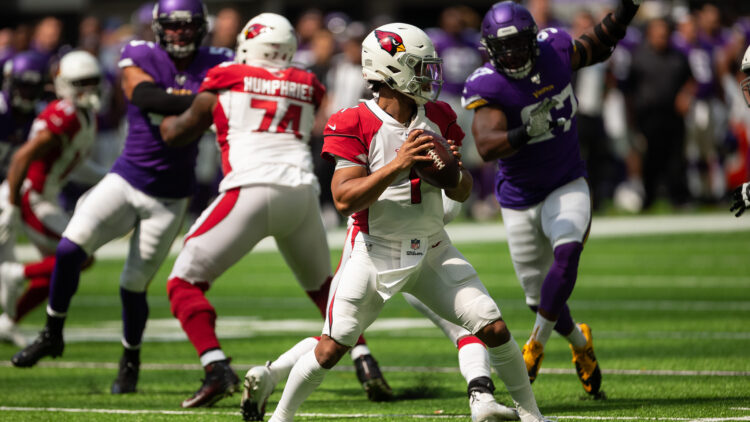 No team had a more impressive season opener than did the Arizona Cardinals. This young squad went on the road to face a playoff team from last season and, if you didn’t know any better, you would’ve thought the Cardinals were the defending division champions. From the first play of the game through the 4th quarter, Arizona took it to the Tennessee Titans, and they came away with a 38-13 win.

Arizona returns to the desert in Week 2 for their home opener against the Vikings. And while the Cardinals don’t come to mind as a team with a decided home-field advantage, you can be sure their building will be rocking on Sunday afternoon as fans welcome the team back home after such an inspiring Week 1 performance on the road.

The Vikings, meanwhile, are on the opposite end of the spectrum. They opened the season with a disappointing effort in Cincinnati despite being favored in the game, losing in overtime to the Bengals. Now, they are facing a second consecutive road game to begin the season and are working hard to avoid that dreaded 0-2 start.

How can the Vikings turn the tide? Just follow this three-step process…

As stated above, you can be sure State Farm Stadium will be abuzz on Sunday afternoon. When the team is good and the game matters, that building and their fans (dubbed the ‘Red Sea’) can generate a frenzied environment that is a legitimate challenge for opposing offenses. The Cardinals have been a team on the rise for two seasons, they opened the season with a momentous win on the road last week, and now the fans want to see it for themselves first hand. Crowd noise will be a factor, at least early in the game, for the Vikings offense. And that kind of environment will only accentuate any momentum the offense generates. To come out with a win, the Vikings must handle this environment well. That means taking care of the football, eliminating – or at least reducing – the amount of pre-snap penalties on offense, and resisting the urge to attempt to do something supernatural.

It’s easier said than done, for sure. As experienced a coach as Mike Zimmer is, you can assume he’s making his team aware of the environment they’ll enter on Sunday. Aside from that, though, what are some things you can do to help the team handle the elements? To eliminate procedural penalties, especially early in the game when emotions are high, rely on your base plays. These are the plays you installed back in the spring, and these are the plays your team knows inside and out. They won’t be anxious in their alignment. They won’t be overthinking. Go with your bread and butter calls to put your players’ minds at ease. The Cardinals were penalized eight times themselves last Sunday, so they are dealing with a similar issue. Emphasize the environment in pre-game meetings, stick with your bread and butter plays and make Arizona execute and remain disciplined just as much as you have to.

The Cardinals front office and coaching staff have done an excellent job of acquiring and developing talented players. The roster is loaded with explosive athletes, accomplished veterans, and rising stars. Chief among them is OLB Chandler Jones. He had 5.0 sacks last week in Tennessee and, essentially, single-handedly wrecked the game for the Titans. Aside from being supremely talented, Jones is also smart and versatile. While the sacks are what everyone remembers about Jones’ Week 1 outing, he actually made his mark on the game right out of the gates on a run play. On Tennessee’s first snap, Jones was lined up as the right outside linebacker. He used an inside swim move to beat three-time Pro Bowl LT Taylor Lewan, and then he confronted two-time defending rushing champion Derrick Henry head on to drop him for a loss of three.

It was on the second play of the next drive when Jones recorded his first of five sacks on the day. He lined up as the left outside linebacker, and Tennessee left him unblocked on the weak side. As QB Ryan Tannehill completed a run action fake and began to reverse pivot to roll out to his right, Jones was right there to hit him and strip the ball. The next few sacks for Jones came when he lined up as the right outside linebacker. Jones used speed moves on the next two sacks, and on his fourth sack of the game, he converted speed to power and bull-rushed his blocker to bring down Tannehill.

Moral of the story: Jones is a game-wrecker, and it’s not just because of raw ability. The Cardinals can line him up on either side of the field. Jones can use power moves and speed moves, and sometimes both on the same play. And Jones is not worried exclusively about rushing the passer; he’s a stout run defender, too.

The Vikings must identify Jones on every snap and adjust accordingly. The Titans didn’t do this appropriately on their second drive when they left Jones as the unblocked defender on the weak side and planned to have Tannehill roll out to that side. They paid the price with a turnover that led to a touchdown.

Identify where Jones is. Every single time.

3. Be Assignment Sound on Defense

The Vikings defense has a lot of talented players on it, too. The front office did a nice job in the offseason of identifying and addressing needs, and now the personnel is in the capable hands of Zimmer and his staff. The situation from a talent and scheme standpoint on the Vikings defense is a good one. With that being said, the Vikings will be hard-pressed to match up – player for player – with Arizona’s skill position players. That’s not a knock on the Vikings, though. In fact, there may not be a defense in the league that can match up in this way with the collection of playmakers on the Cardinals roster. QB Kyler Murray, RBs James Connor and Chase Edmonds, and WRs AJ Green, DeAndre Hopkins, Christian Kirk, and Rondale Moore…it’s just a lot to figure out how to cover. This is a youthful and explosive group of playmakers. While Green and Connor won’t scare you in this way, the rest of that group will.

The key is not isolating each player to figure out how to shut them down. Instead, look at the sum of the parts and identify what head coach Kliff Kingsbury and his offensive staff do to effectively deploy these playmakers and distribute the ball to them.

In watching back their Week 1 performance in Tennessee, it’s clear that misdirection is a crucial component to what Kingsbury wants to do on offense. This misdirection doesn’t only come in the form of pre-snap motion and in-play trickery. It also comes in the use of exotic formations and specific alignments leading up to the snap. Zimmer is adept at this schematic gamesmanship and in-game play-calling, so this will be an intriguing matchup to watch. But it’s certainly a challenge for the Vikings defense – both players and coaches.

It’s natural for competitive, prideful, and talented players to want to go above and beyond to make a play for their team, especially when the odds are stacked against them. Vikings defenders must avoid this temptation on Sunday because even the slightest misstep or minor missed assignment can get blown up into a field-shifting or game-altering play for the offense.