With Anthony Barr Restructure, Put LB on Your Draft Radar 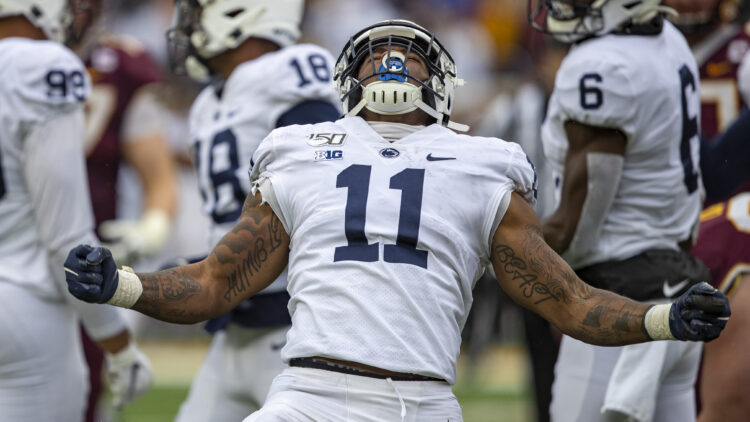 News broke regarding the Minnesota Vikings on free-agency-week eve that long-time linebacker Anthony Barr would likely be restructuring his large contract, freeing up cap space for the team. The move was widely expected by Vikings faithful, and it finally materialized as the weekend came to a close.

The kicker: Barr will allegedly become a free agent at this time next year. And that means 2021 could be his swan song with the Vikings after [what would be] eight seasons with head coach Mike Zimmer.

Barr’s continuance with the franchise beyond 2021 is closely linked with Zimmer’s future. That will be determined in 2021 – Zimmer and this group must win a playoff game in 2021. Otherwise, the 64-year-old is probably looking at a change of scenery that has no purple décor.

The broad impact of the Barr news is that the Vikings may be linebacker-shopping in the 2021 NFL Draft – a tidbit on the grocery list not mentioned much to date.

If Barr does indeed exit-stage-left after 2021, Zimmer would love to have his replacement ready for next season. Keep in mind – Zimmer doesn’t prepare for a season thinking “if I’m here next year.”

Conveniently, there are notable linebackers available in the draft. And maybe even at the Vikings 14th pick.

This would take a mini-miracle, though, for Parsons to slip downward. He’s currently projected to be a Top 10 choice in most mock drafts, but it would not be stunning for the Nittany Lion to plunge a bit to Minnesota.

“Parsons really jumps out on tape, as he made a lot of big plays for Penn State with clutch stops and a lot of disruption for the opponent. He has good size and strength to go along with speed and athleticism, and from a skill-set perspective, he is in the same league as other recent first-round linebackers like Devin White or Roquan Smith. Parsons is a do-it-all defender who supplies a big presence in the middle of the field.”

J.O.K. is even more doable in the draft than Parsons because Spielman could likely trade back with a different team, nab a 2nd Rounder that he covets, and still get his man in Onwusu-Koramoah.

“Jeremiah Owusu-Koramoah projects as an impact defender at the NFL level. There’s an undeniable level of explosion to his game that helps Owusu-Koramoah mask the limitations of his game on account of his stature. An ideal match from a team perspective would be one that wants to stay in their base defensive personnel at a higher than average rate, where Owusu-Koramoah’s versatility can shine brightly against spread sets. There’s plenty of experience playing as a pressure player up the middle and even as a pseudo-third safety who is walked outside the hashes and taking man-to-man reps against wide receivers from the slot. Owusu-Koramoah took a big step forward with his game in 2020 and was in several contests the best football player on the field—he moves at a different speed than his teammates and his instincts to find the football and make big plays is undeniable. The more you watch, the more you love. Just don’t ask him to play a traditional stack role or attempt to work him as the MIKE linebacker for sustained, optimal success.”

If you’re keeping score at home, it is more realistic that the Vikings end up with J.O.K. than Parsons as he is not quite as sought after as the Penn State alumnus. 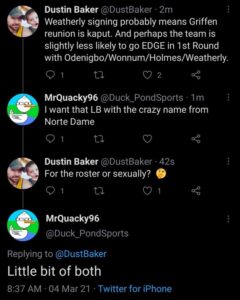 Collins is slated to join a team at end of the 1st Round in April. So, if the Vikings pulled off a trade as they did with the San Francisco 49ers in 2020 – well, boom. Last April, Spielman traded back with San Francisco to land Jeff Gladney at the 31st spot while the 49ers drafted wideout Brandon Ayiuk. In this scenario, too, the Vikings would probably end up with at-least a 2nd-Round pick for sliding back over a dozen spots.

“Collins is a game-impacting defender and one of the more understated prospects in this year’s draft. He’s not the small run-and-chase linebacker teams prefer these days. Rather, he’s a throwback of sorts, and possesses the size as well as speed to be a pass rusher as well as play in coverage. Collins is a true three-down defender who should quickly break into a starting lineup and comes with outstanding scheme versatility.”