Why the Vikings won’t trade Cousins 2.0 – The Rate of Return 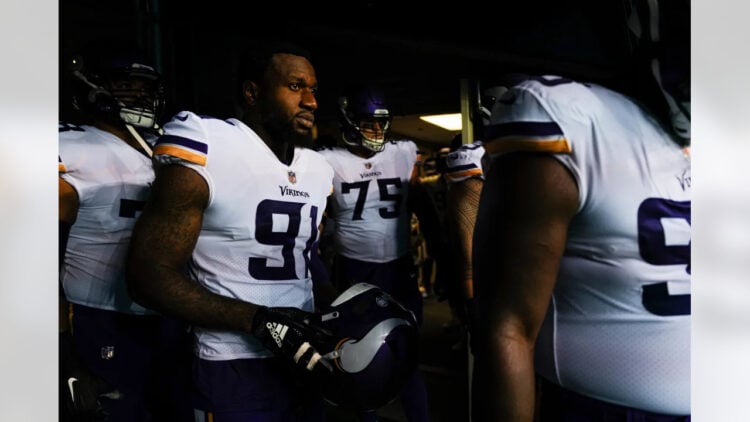 Nothing screams the off-season is here like stretching one topic into a series!

I’m joking, as this topic is a complicated, multi-faceted, and incredibly important one. As I’ve stated many times since 2018, I’ve found (and continue to find) it strange and interesting that Vikings fans in particular are bending over backward to explain (and now trade) away the one thing we’ve all wanted more than anything.

For some of us, we’ve wanted that thing (a franchise quarterback who wasn’t a year or two from retirement/doing commercials about copper socks) for our entire lives. Enter Kirk Cousins, who has performed admirably since joining the Vikings in 2018 and who has received the least amount of respect from fans and media members alike of any top 10 QB in the league.

The first part of this series touches on the fact that the Vikings won’t trade Cousins thanks to the fact that head coach Mike Zimmer knows that he’s another non-deep playoff run away from the unemployment line.

The second is actually pretty intertwined with the first and can best be encompassed by the following article from Fansided.

You can read the story or look at the following graphics from that story, and then guess where I’m going with this. 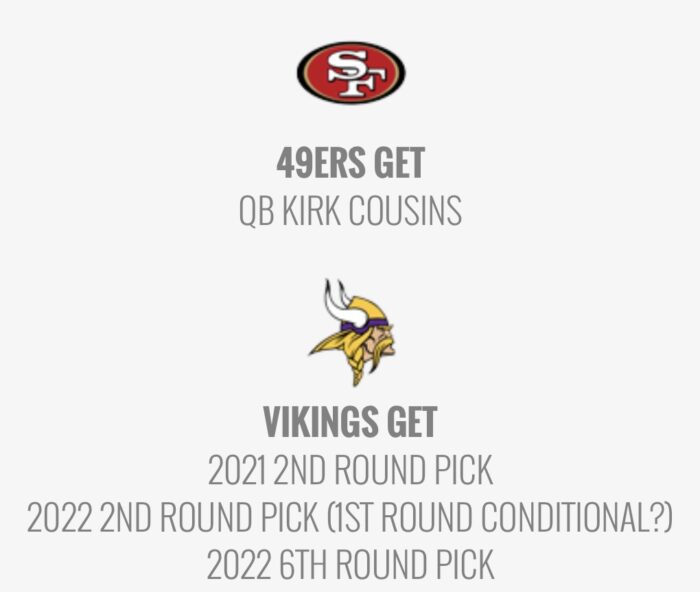 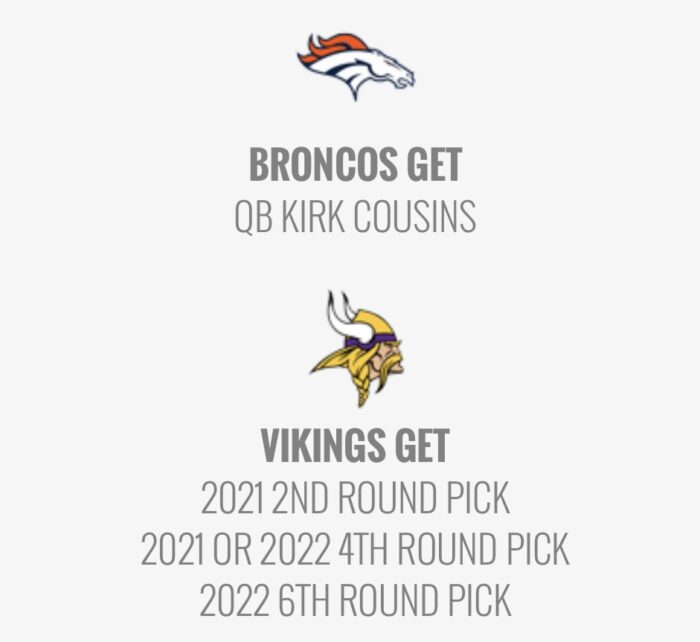 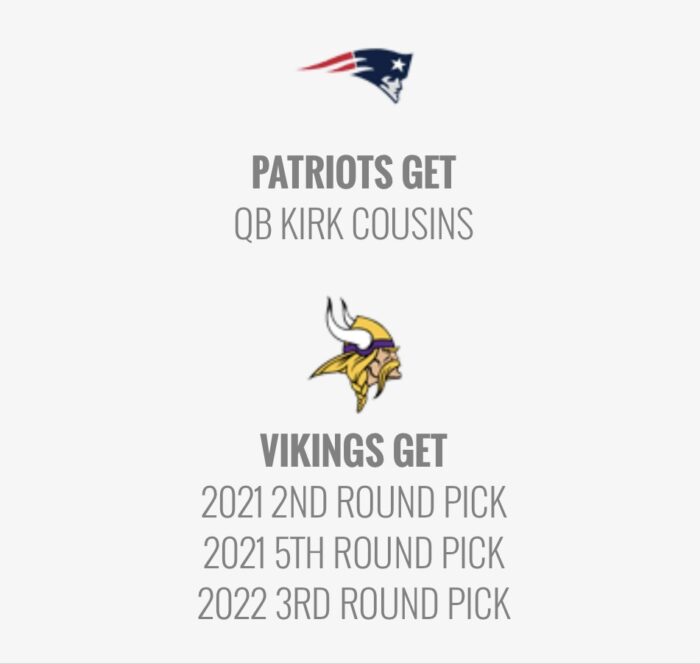 You’re telling me that a franchise that has been unable to draft and develop a quarterback that played back-to-back 16-game seasons from 1978-to-Cousins will be happy with a second-fourth-and-sixth round haul for Cousins? The same team that was so desperate for the above that they forever changed how NFL contracts are done to land one?

I’d be against this move even if the Vikings got the same haul that the Detroit Lions did for Matthew Stafford, as the Draft is always a crapshoot and as we’ve seen the Vikings have issues drafting quarterbacks. That includes Rick Spielman, who was once so desperate for QB-help that he brought in Josh Freeman, Donovan McNabb, and Matt Cassel.

But yeah, let’s trade Cousins to get the pick back that the team gave up for Yannick Ngakoue, and two other picks that’ll be traded down and converted to multiple 7th-rounders.

As part 3 of this piece will expand upon, this Vikings offense is ready NOW. It is a halfway decent offensive line away from being one of the best in the NFL, and losing Cousins would potentially waste the remainder of Adam Thielen’s prime, the development of Justin Jefferson, and prime Dalvin Cook.

Outside of the financial relief, there is no reason or logic behind the idea that a team who has a head coach who needs to win now and has one great unit between his offense, defense and special teams, would change that to an 0-and-3 situation for a second/fourth/sixth.

It’d remove any chance this team has at relevancy in 2021, especially considering how many teams with cap space will benefit from the sheer amount of free agency talent that will exist thanks to the COVID cap.

I think that the Vikings won’t compete in 2021 either way, but they’ll literally stand no chance if they make the above trade. Early on during the speculation fest this topic generated, some thought that the Vikings could somehow leverage a Cousins trade to acquire DeShaun Watson.

However, he’s reportedly made it clear that he wants nothing to do with the Vikings and so it’s hard to imagine any top tier veteran free agent QB would want to come play behind what is now a bottom-three offensive line. That’s before the team potentially loses Riley Reiff.

The Vikings and its fans should thank their lucky stars that Cousins continues to want to be here. He’s received zero respect from the fans/media or anything resembling pass protection. In fact, the terrible line is trending down and is clearly an impediment on and off the field.

If Russell Wilson is unhappy with Seattle’s 16th-ranked O-line, do you really think he’d love the 29th-ranked one?

But using that second round pick on a safety or defensive lineman would change all that!

Stay tuned, as there are a few more entries to this series coming. Hopefully by the end of this we can all come together and start focusing on what really matters. Mock drafts!