Weird Gambling Odds for Vikings against Cardinals in Week 2 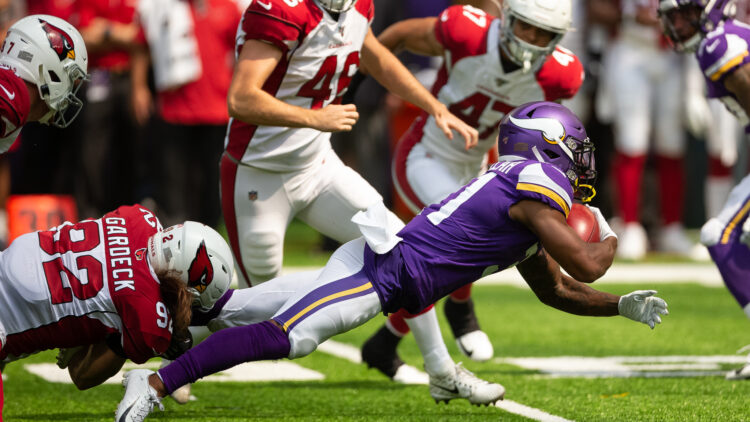 The Arizona Cardinals eviscerated the Tennessee Titans – on the road – to start the 2021 NFL season, 38-13. Yes, that’s the Tennessee squad with worldbeaters like Derrick Henry, A.J. Brown, and Julio Jones.

Humbled were the Titans as the Cardinals stock soared, led by a superstardom-seeking Kyler Murray and a defensively demented Chandler Jones registering five sacks [in a single game] on quarterback Ryan Tannehill.

The Minnesota Vikings offensive line struggled profusely – what are the odds of that, huh? – while the Cincinnati Bengals upended Mike Zimmer’s team in overtime after a questionable, game-hinging call against Dalvin Cook. The ball leaked out with Cook’s buttocks on the ground, causing the officials to deem the play a fumble. Replays evaluated the fumble for several minutes, choosing to side with Cincinnati. Game over.

Now, the Vikings set sights on the mighty Cardinals, who thrashed a very good team in Tennessee to start the season. Yikes. Minnesota must rebound from a loss to the 4-11-1 (from 2020) Bengals – and at Arizona is a terrible place on the map to start. Minnesota has not won a game in Arizona since 2008.

But here’s the deal: The point spread is fairly tiny in favor of Arizona. The Cardinals are 4.5-point favorites per BetOnline. What gives?

The rule of thumb is to assess the home team three points out of the gate as a favorite – simply to account for homefield advantage. After that, Vegas evidently believes Arizona is “one point better” than Minnesota.

The Vikings stunk for about half of its Week 1 performance whereas the Cardinals dazzled. It doesn’t add up.

So, what does Vegas know that Joe Everyman does not?

Perhaps the Cardinals track record of prolonged success under head coach Kliff Kingsbury and quarterback Kyler Murray is too suspect. Arizona had the playoffs available on a ruby red platter after Murray and DeAndre Hopkins executed the “Hail Murray” last November versus the Buffalo Bills. Then, they faceplanted. Their losing woes, coupled with those of the San Francisco 49ers, even gave the Vikings a theoretical pathway to the 2020 playoffs. But the Vikings faceplanted, too. That’s how the Chicago Bears wound up playing the New Orleans Saints on Nickelodeon.

Maybe the Vikings aren’t perceived that terribly following the Cincinnati kerfuffle? It’s tricky to adjudicate for the Vikings stratosphere because the loss was so gut-wrenching, evidenced by the overturned Cook fumble. Most Vikings fans would rather lose decisively than experience a ticky-tack, interpretive relay determining the outcome of a game.

In the first half, the Vikings defense was reminiscent of pre-2020 Zimmer tendencies. Yet, they lost their way when Joe Burrow got cooking. Vegas might just believe that Zimmer will fix those shortcomings, with an offense to follow suit. After all, when the Vikings weren’t littering the field of Paul Brown Stadium with stupid offensive penalty flags, Kirk Cousins actually moved the ball. The problem was the copious amount of 2-and-20 or 3-and-20 situations. Cousins can overcome those every now and then – but not every drive.

The Vikings must find two wins in the next three weeks – plain and simple. The Bengals game was on tap as a “sure thing” based on how bad Cincinnati played in 2020. It didn’t happen. The makeup work begins on Sunday against a very good team – one that kicked in the teeth of the Titans.

All in all, oddsmakers believe it will be a close affair. Which is telling.
Dustin Baker is a political scientist who graduated from the University of Minnesota in 2007. He hosts a podcast with Bryant McKinnie, which airs every Wednesday with Raun Sawh and Sally from Minneapolis. His Viking fandom dates back to 1996. Listed guilty pleasures: Peanut Butter Ice Cream, ‘The Sopranos,’ and The Doors (the band).