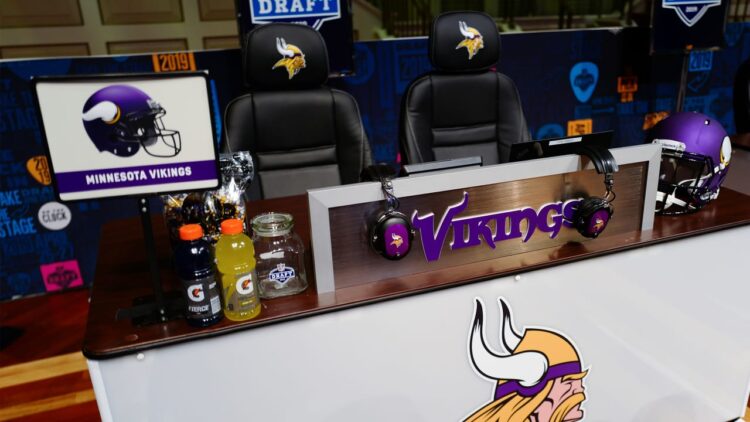 When Minnesota Vikings Twitter doled out its annual awards in January, The Draft Network’s Jordan Reid was tapped as the best NFL draft mind in Vikings orbit.

Reid is back with his Mock Draft 6.0. He’s also noteworthy because Vikings fans overwhelmingly voted for him, so the trustworthiness is tangible. Reid isn’t “some guy” sending off mock drafts into the digital stratosphere for clicks.

Unsurprisingly, he pegs the Vikings for a deeply detailed draft scenario in April. Per Reid, the Vikings may trade back in the 1st Round, scoop a 2nd Rounder, and select offensive lineman Samuel Cosmi from the University of Texas.

Minnesota would surrender the 14th overall pick to the Tennessee Titans, enact a pick-swap in the 4th Round, and seize the 22nd pick and 53rd pick in the 2021 NFL Draft.

This is what Reid said of the transaction:

“Another team that I think should be circled with a sharpie as a trade-back candidate is the Vikings. Rick Spielman’s batting average is nearly 1.000 in the second round, as he’s drafted players such as Eric Kendricks, Dalvin Cook, and Brian O’Neill in that area. Without a second-rounder, he could work hard to recoup the pick he lost in the Yannick Ngakoue trade. With the team not wanting to reveal their draft and/or free agency plans by remaining coy about their future plans for 2020 second-round pick Ezra Cleveland (on whether or not they plan to keep him at guard or move him to tackle), they opt to select the heir apparent to Riley Reiff. Cosmi is an athletic blocker that contains lots of upside. Right down the alley of what we’ve seen the team prefer in past draft classes, he enters a situation where he could redshirt as a rookie prior to taking over as the entrenched option in 2022.”

While the verdict is still out on Cleveland, that 10-years-running list has absolutely no trash anywhere near it. Spielman is a 2nd-Round cosmocrat. He doesn’t have a 2nd-Round pick at the moment because his 2021 2nd Rounder was used to woo Yannick Ngakoue to the organization late last summer. Ngakoue played from the Vikings for seven weeks before his exodus to Baltimore in exchange for a clawback 3rd-Round pick this April.

Reid’s mock draft plops the Vikings back in the 2nd Round. If one trusts history as an indicator of future happenstance, Spielman re-entering the 2nd Round is a must.

In Reid’s official scouting report on Cosmi, he notes:

“Cosmi is a right tackle that has the potential to eventually slide over to the left side if able to correct the flaws in his lower half and continue to gain muscle mass onto his frame. The former Longhorn blocker is an athletic offensive tackle that has many ingredients already present, but needs the proper coaching in order to blend them all together and possibly add more in order to reach his final state.”

That sure sounds like an offensive lineman that Spielman covets. Cosmi is already determined as an ideal fit for a zone-blocking scheme – and that’s what the Vikings utilize.

Of note: Cosmi may not be a ready-on-day-one commodity. So, that is a bit disturbing because Minnesota needs offensive line bodies now. One or two competent guards are a requirement if the team wants to revisit the postseason in 2021.

Indeed, an offensive lineman may be the choice in the 1st Round – no matter where that pick may shake out with trades and such. But what about the 3-technique defensive tackle spot?

Minnesota needs one – badly. For the last two years, the Vikings have used players like Shamar Stephen and Jaleel Johnson at the position. The team needs more oomph at defensive tackle next to Michael Pierce.

To be sure, there are several 3-technique DTs available via free agency. But the Vikings are cash-strapped. If Spielman is to land a proven 3-technique DT in a couple of weeks, some other quasi-stunning roster moves may be necessary. Beware and stay tuned.

Yes, if Spielman solves the longstanding 3-technique riddle, an offensive lineman is probably the smartest avenue for the 1st Round of the 2021 NFL Draft. Otherwise, it’s a coin flip between offensive line and defensive line needs.