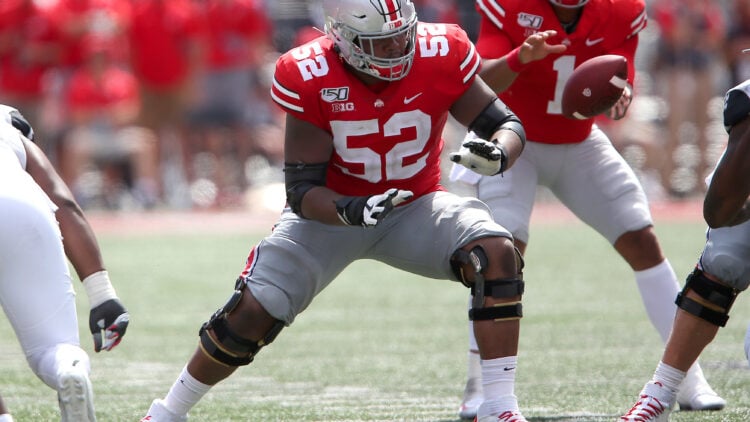 Earlier today, and really since way back in November of 2020, I pointed to Ohio State Wyatt Davis as the cure to the same ills the Vikings have had since really the beginning of the 2017 playoffs. If you recall, it was during the off-week that playoff year that the Vikings had to shuffle their offensive line courtesy of injuries on the interior. After that season, the team lost both guards in Joe Berger and Nick Easton, and their pass protection (especially) has increasingly gotten worse despite changing the way that the NFL pays quarterbacks in 2018.

Yesterday the Vikings drafted their left tackle of the future in Christian Darrisaw. You can read about that here:

The Grades Are in for the Vikings Selection of Christian Darrisaw

You can also read my take on Davis and his impact on the Vikings’ chances, here:

The Vikings are a Wyatt Davis pick away from legitimate contention

This is huge. HUGE.

The Vikings have invested more in their offensive line in the last couple drafts than any team in the NFL. A first rounder on Garrett Bradbury, a second rounder on Ezra Cleveland, and second on Brian O’Neill, etc. The jury is still out on Cleveland who did well in the run game but was bad against the pass rush. People have already labeled Bradbury a bust, but to be fair he hasn’t had much support around him these last couple of seasons.

With Darrisaw and now the steal of the draft in Davis, the Vikings will have a young, powerful offensive line with two shining new players in Darrisaw and Davis that were particularly known for not giving up sacks in college. If you’re reading this article, you know just how important that is. Davis was also particularly known for being an absolute beast in the run game, which, again, you know what that means.

Davis was an absolute stud at Ohio State.

Here’s his bio from NFL.com:

Davis was one of the top recruits in the country in 2017, named the Los Angeles Times’ Southern California Player of the Year as an offensive tackle at St. John Bosco High School while also winning the U.S. Army’s Glenn Davis Award for excellence in community service, education and athletic distinction. Ohio State nabbed the five-star recruit, and he redshirted in 2017. He played in all 14 games of the 2018 season but did not start at right guard until the final two games of the year. Davis started all 15 games for the Buckeyes at right guard in 2019, playing well enough to earn first-team Associated Press All-American and first-team All-Big Ten accolades. He initially opted out of the 2020 season due to COVID-19 but decided to opt back in when the Big Ten announced it would have a fall football season instead of playing in the spring. Davis was once again a first-team AP All-American and all-conference selection in 2020 for his play in eight starts at right guard. He helped lead the Buckeyes to the national championship game, but Davis was forced to leave that contest with an injury in the first half. His late grandfather, Willie, was a Pro Football Hall of Fame defensive lineman for the Green Bay Packers in the 1960s. Wyatt’s father, Duane, played football at Missouri but struggled with knee injuries. He eventually became an actor, landing movie roles in “The Program” and “Necessary Roughness” as well as “Beetlejuice,” while also getting parts on TV shows like “21 Jump Street” and “A Different World.” Wyatt’s brother, David, played football at Washington State and Cal. — by Chad Reuter

Overview
There is no questioning Davis’ strength or toughness. He has plenty of highlight reels spotlighting a chippy field demeanor. However, there are questions about whether his lack of desired physical traits and body control are things he can work around consistently as a pro. He’s powerful at the point of attack. He plays with leverage and leg drive in the run game, but the average control and athleticism make him more of a phone-booth blocker. He has the anchor and hand quickness to handle his work in pass protection but his recovery talent is a bit limited. Davis should be an NFL starter for a power-based run scheme but his lack of length, body control and footwork prevent him from playing wide on a consistent basis.

You can also read about the Vikings’ other Day 2 picks Here:

Did the Vikings Draft Their QB of the Future?