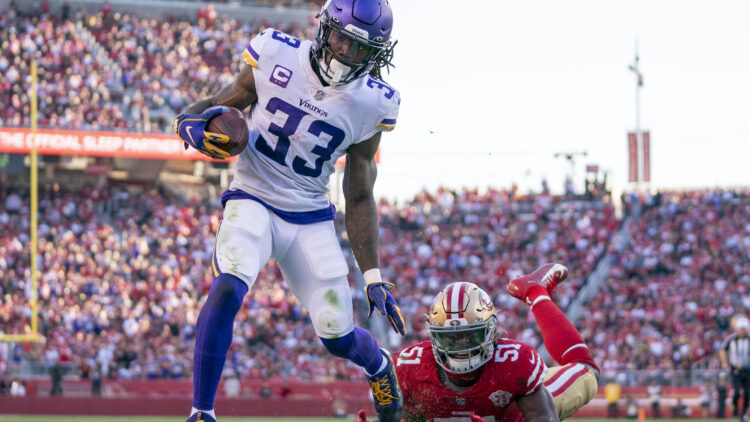 The Minnesota Vikings lost RB Dalvin Cook to a dislocated shoulder in Sunday’s 34-26 loss in San Francisco. An MRI is expected to take place on Monday to confirm the early diagnosis.

Cook went down with the injury in the third quarter with 1:30 remaining, which resulted in a four-yard loss and fumble recovery by San Francisco, leading to a 49ers field goal. After the play concluded, Cook was seen in severe pain on the ground and was carted off to the locker room moments later.

“I know Dalvin is going to bounce back,” Vikings wide receiver Justin Jefferson said to Pioneer Press reporter Chris Tomasson after the game. “We don’t know how serious that injury is, but we’re just keeping him in our prayers, and hopefully he’s OK and comes back for us.”

Cook was ruled out of the game immediately, and the rest of his season remains in jeopardy as the Vikings continue their playoff push.

If Cook misses the rest of the season or extended time, Alexander Mattison and Kene Nwangwu will be utilized heavily down the stretch for Minnesota.

“I think there’s a chance (Nwangwu) might end up getting some more playing time,” Zimmer said about RB Kene Nwangwu to ESPN reporter Courtney Cronin after the game.

Depending on the severity of the dislocation, most shoulder dislocations take 12 to 16 weeks to completely recover. In that case, Dalvin Cook would miss the remainder of the 2021 season.

Losing Cook would be a massive blow to Minnesota’s offense as he rushed for 773 yards on 171 carries while averaging 4.5 yards per carry and four touchdowns on the ground, along with 27 receptions for 202 yards receiving through nine games.

Alexander Mattison has stepped in when his number is called and impressed, taking over for an injured Dalvin Cook early in the season. When called upon, Mattison has proven he can produce as RB1 for Minnesota.

The Vikings are 2-0 on the season when Mattison starts for an injured Dalvin Cook, and the offense averages 24.5 points per game. During Cook’s absence, Mattison carried the ball 52 times and rushed for 225 yards while averaging 4.4 yards per carry and two touchdowns, plus with 13 receptions and 99 yards receiving.

The only thing Minnesota players, coaches, and fans can do now is to wait and see what the MRI reveals on Monday. The Vikings (5-6) are currently the #7 seed in the NFC playoff picture and will travel to Ford Field next week to take on the Detroit Lions (0-10-1).