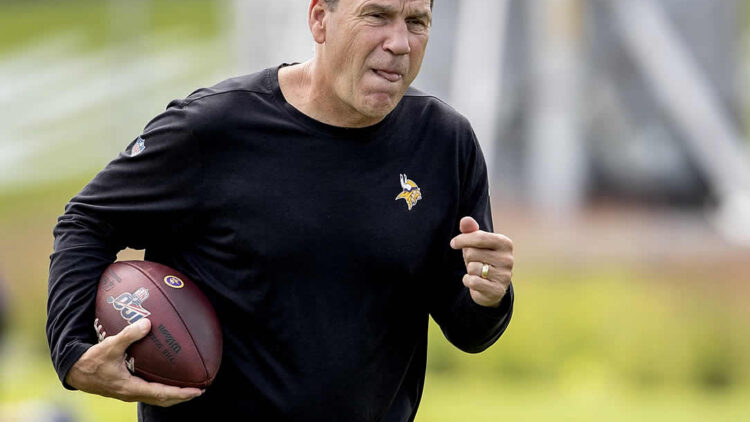 Someone within the Minnesota Vikings organization recently leaked news to the press that offensive coordinator Gary Kubiak is contemplating retirement yet again. Kubiak and his Denver Broncos won the Super Bowl in 2015 with a hellaciously hot defense and a version of Peyton Manning who played about as well as 2020’s Carson Wentz. Manning galloped away from the game while Kubiak stayed on for an extra season. Denver finished 2016 with a 9-7 record, significantly undercutting expectations. It would become the beginning of an ongoing stretch of futility for the Broncos – one that culminated last week with John Elway relinquishing control of his general manager responsibilities.

Kubiak retired following the 2016 season and even gave an impassioned speech to solidify the commitment to ending his career.

Then, he resurfaced in 2019 when Vikings skipper Mike Zimmer summoned Kubiak’s services. Partnered with first-time offensive coordinator Kevin Stefanski, the Vikings engineered Zimmer’s best offense of his Vikings tenure (up to that point). As a result, Stefanski was plucked by the Cleveland Browns for a head coaching gig of his own. It paid off. The Browns won their first playoff game since the film ‘Dumb and Dumber’ was released 26 years ago. Feel old?

Kubiak assumed full control of the Vikings 2020 offense. That offense topped 2019’s production as Minnesota finished fourth in the business via offensive yards gained. Perhaps a little continuity was the offensive catalyst for a team that is heralded as a defense-first operation.

But now the Vikings may be back to square one. Kubiak is reportedly on his way out, this time at age 59. If he does not waver from his decision, the Vikings will employ their sixth offensive coordinator in eight seasons.

The choice for offensive coordinator should come soon, nevertheless. Here’s why:

DeFilippo Was Late for Good Reason

The first “ordinary” change in leadership at offensive coordinator did not occur until 2018 during Zimmer’s fourth year as boss. Norv Turner was given ownership of the offense when Zimmer arrived in 2014. He would turn out to be the longest-serving offensive coordinator of the Zimmer era at 2.5 seasons. Turner and the Vikings encountered a semi-mysterious falling out when the former Washington, Oakland, and San Diego head coach resigned in the middle of the 2016 season.

Turner was immediately replaced by Pat Shurmur – the architect of the Case Keenum-friendly offense from 2017. Because of his miraculous work with a journeyman like Keenum, the New York Giants snatched Shurmur for head coaching duties in 2018.

That is when Josh DeFilippo signed on – for about three months (of regular-season games). DeFilippo was the next big thing as his Eagles won the Super Bowl in 2017. He was the team’s quarterback coach and was credited with revitalizing Nick Foles’ wayward career.

DeFilippo was canned less than one year after his hire date. Foles, in retrospect, was a Joe Flacco-like tale. He was terrific for about a month or two and will be primarily remembered for that stretch.

In any event, the Vikings waited for “their man” until Super Bowl LII at U.S. Bank Stadium was in the books. DeFilippo was awarded a ring and a shiny purple offense. Based on this hiring decision timeframe, it is fair to surmise that the latest the Vikings would wait on a Kubiak retirement verdict is about 3-4 weeks.

A more apropos hint on the timing of the new offensive coordinator announcement can be derived from the Kubiak experience of 2020. Stefanski joined the Browns soon after the San Francisco 49ers ended the Vikings season in 2019. By January 23, 2020, Kubiak was formally promoted to full-time offensive coordinator. The speculation of “whose offense is this – Stefanski or Kubiak?” was over.

Whether Gary Kubiak or his son, Klint, is the leader of the offensive enterprise, the determination will likely be made within two weeks (but keep that February artificial deadline in mind). The here-and-now is prime pickings for offensive-coordinator job placement. You may get an alert to your phone any minute that breaks the news.

Bet on a Kubiak

The safest bet is that Minnesota will have a Kubiak-led offense in 2021. Now, they must resolve the first-name matter. Will it be ‘Gary’ or ‘Klint?’

Klint was involved with the Vikings organization six years before anything with his father came to fruition in Minnesota. The younger Kubiak was a quality control coach in 2013. So, if the choice is Klint, the situation will not totally reek of nepotism.

About one week ago, Zimmer praised continuum pertaining to the offensive philosophy. Should Gary Kubiak retire, his son is probably the closest method by which to adhere to that. Sharing a last name does not mandate duplicity, but Klint Kubiak has filled the role of quarterbacks coach for two full seasons. He knows what works for Kirk Cousins and what does not. Additionally, he is the most practical choice based on normal coaching progression. Two years as quarterbacks coach is a fair stepping-stone to the next plank – offensive coordinator.

The decision nears, and it will probably be a Kubiak.