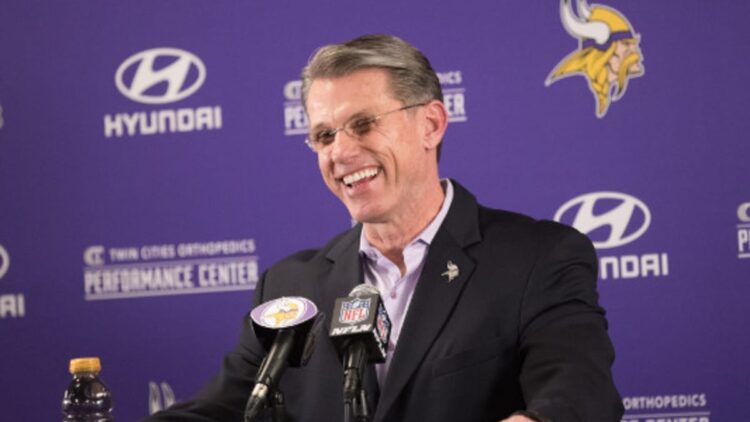 To date, players frequently mock-drafted to the Minnesota Vikings in 2021 include defensive ends Gregory Rousseau and Kwity Paye while some editions forecast offensive lineman Christian Darrisaw joining the franchise. Minnesota has needs at offensive line, defensive line, and safety this offseason, so the aforementioned selections indeed apply.

The latest chapter in mock-draft heaven is provided by ProFootballNetwork.com. And at No. 14 in this volume, it’s Alabama Crimson Tide defensive lineman Christian Barmore that fortifies Mike Zimmer’s defense.

This prognostic was made by PFN’s Ian Cummings. On Barmore, Cummings detailed:

“The Minnesota Vikings’ defense struggled mightily in 2020, and the defensive line was near the heart of that underperformance. The Vikings were ineffective in clogging running lanes. In the passing game, inconsistent pressure helped opposing quarterbacks stay on target. Improving the defensive line is one of Minnesota’s most important tasks in 2021, and at No. 14, Christian Barmore is an underrated option. As noted by others, Barmore’s meteoric rise late in his collegiate career mirrors that of past Alabama linemen like Daron Payne and Jonathan Allen. Barmore has the size, explosiveness, and heavy-handed style to be just as disruptive in the NFL. For the Vikings, he’d be an immediate upgrade on the interior and reinvigorate a position group that desperately needs added talent.”

A Barmore-to-Vikings fruition may be a bit of “reach” for Minnesota at No.14. But the Vikings need a productive 3-technique defensive tackle, and this would fit the “need” draft philosophy.

Barmore started 2020 a wee bit slow but progressed aptly as the season wore on. That’s probably why he’s slated to be plucked among the first 15 picks of the 2021 NFL Draft. Barmore and the Crimson Tide won a National Championship when Alabama walloped the Ohio State Buckeyes in January. The 6’5”, 310lb defensive tackle’s draft stock has soared since.

If chosen by the Vikings, Barmore would presumably start on day one. Minnesota has no clear-cut incumbent at the 3-technique slot on its depth chart. In two seasons at Alabama, Barmore registered eight sacks and three forced fumbles. Currently, the Vikings don’t really expect anything of the sort from the 3-technique spot. Ergo, Barmore would be a breath of fresh air if his collegiate success seamlessly transfers to the pros.

He does have weaknesses – as do most rookie hopefuls at this time of year – but Barmore’s upside is too tantalizing to overshadow his shortcomings.

3-Tech Is a Tremendous Need

For about the last five years, the Vikings 3-technique history is a hodgepodge of “just good enough” to start. Outside of Sheldon Richardson – who created a lot of quarterback pressure in 2018 – Minnesota employs players like Shamar Stephen, Tom Johnson, and Jaleel Johnson in the middle of the line next to the nose tackle. This is a spot that Zimmer evidently believes he can skimp on the defense.

But when the organization auditioned Richardson for one season at a loftier price tag, it did prove they were at least semi-interested in bolstering production from the 3-technique position. Richardson was too expensive to re-up in 2019, and he has been missed. He personally notched 25 quarterback pressures in 2018 alone whereas Stephen and Johnson totaled four pressures combined at the position in the last two seasons – a jaw-dropping variance.

Drafting Barmore theoretically gets Zimmer closer to a Richardson-type than the status quo of Stephen and Johnson.

Free Agency Will Prove if Barmore to MIN Is Real

Onlookers to the Vikings offseason will know in about one month if Barmore is truly a possibility. Although general manager Rick Spielman does not have much cap space at the moment, some upcoming moves will probably materialize, jettisoning bloated contracts from the budget.

Then, Minnesota could fix the 3-technique woes with a veteran presence rather than a wait-and-see-and-hope strategy that a rookie will mandate. Several robust defensive tackles are scheduled for free agent tours – Kawann Short, Geno Atkins, Shelby Harris, and Malik Jackson are a few of the sexy names.

If March passes and Shamar Stephen is [somehow] still on the roster, well, perhaps the Vikings are exploring defensive tackles at the No. 14 draft spot. Should the team sign up for Short, Atkins, Harris, or Jackson – a Barmore pick is mostly unnecessary.

No matter what, though, a splashier 3-technique to pair with Michael Pierce at nose tackle is needed.