Vikings Fans Should Start Keeping an Eye on Daniel Jones 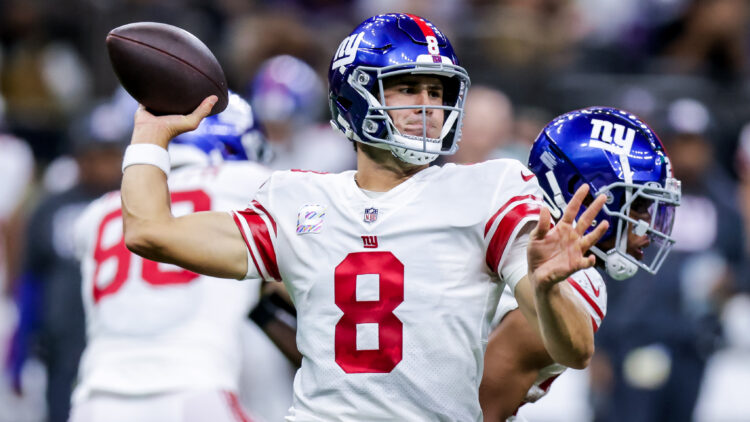 As a function of long-term planning, fans of the Minnesota Vikings should follow the remainder of the season for New York Giants quarterback Daniel Jones somewhat intimately.

Minnesota is 24% of the way through a pivotal season, a campaign carrying far-reaching implications on the team’s future. If the Vikings fail to qualify for the postseason, the tenure of Mike Zimmer as head coach is likely over. And current signal-caller Kirk Cousins could follow in a full reset. The Vikings front office – whoever may fill those jobs in the offseason – would have to be creative with the exodus of Cousins. He’s owed an elephantine sum of money in 2022, but the team could wiggle out of the deal via trade. Cousins’ future depends on the philosophy of the next coach or general manager.

If there is no Cousins with white horns on his helmet in 2022, Minnesota will be quarterback shopping. Indeed, Kellen Mond is the mini-heir apparent, yet no one quite knows if he’s the true plan of action. A new coach or general manager could have a completely different idea for the QB1 strategy of the Vikings.

Imagine the Vikings 2021 season ends with no postseason. Zimmer would exit, and the statuses of Rick Spielman and Cousins would be uncertain. If a new general manager wants to clean house, the degree to which the person does so is debatable. Do the Vikings deconstruct the foundation of Dalvin Cook, Justin Jefferson, Eric Kendricks, Adam Thielen, Harrison Smith, etc. – and embark on an unadulterated rebuild? You know the kind – one with 3-14 seasons afoot. Or – do they simply reset with a win-now coach, retaining Cook, Jefferson, and the others?

Daniel Jones is the interesting actor in that screenplay. Quietly, Jones is maturing marvelously in New York while his team stagnates at a 1-3 record like another team we know. Through four weeks of 2021, Jones is the NFL’s 10th-best quarterback per a mashup of Pro Football Focus grade, QBR, and Passer Rating. The man can play, and his development is trending upward. The Giants likely won’t finish this season with a winning record, leading to erroneous finger-pointing at Jones. It’s what happened with Sam Darnold and the other New York team. The Giants, like the Jets, might want a fresh start with a high draft pick.

Finding a way to obtain Jones for the Vikings would scoff at a full rebuild, instead resetting with a Year Four passer who is getting better each season. If the Vikings could land Jones this offseason – only a theory for now – he’d have two years left on his rookie contract, which is a perfect sample size for Minnesota to evaluate his long-term prognosis. A productive Jones – a player that will be 25 years old next spring – could end up as franchise quarterback for the Vikings. His progression is encouraging. Meanwhile, the Vikings might need a quarterback in four months. The NFL moves fast.

And, for better or worse, the Jones theory fits with the Vikings modus operandi. Rarely does the team develop a homegrown, rookie quarterback. When they try it – it flops. Daunte Culpepper is the exception. Recall Christian Ponder and Teddy Bridgewater. Historically – like all the way back – Minnesota prefers tapping veterans for quarterback duty, skipping from passer to passer until it finds one who’s decent. Rich Gannon, Jeff George, Randall Cunningham, Brett Favre, Warren Moon, Donovan McNabb, and others can attest. The difference with Jones is youth. He’s 24, not 34. Should he keep this early 2021 pace, his ceiling is spacious, and the Vikings wouldn’t have to worry about squeezing a reclamation of his prime onto the field. Jones is a youngster, equipped with tools for growth – not tickets to a retirement party.

Much of the Jones-to-Minnesota hypothesis is contingent upon the Vikings failing this year. That is not a foregone conclusion. The team can still make a run as it possesses the roster talent for it. However, if the organization encounters structural change and the new leadership prefers to win-now with the existing veterans on the depth chart, a look into Jones’ availability is sensible.