As I said on our sister-site, purplePTSD.com, in another article that stemmed from information randomly emailed to me from people looking to get their stuff added to a story, sometimes what I’m emailed is actually interesting and worth noting.

Where US Bank Stadium ranks for COVID ticket prices in 2021

This time, though, I’m not going to be covering the cost of watching the Vikings play in 2021, but rather the people doing that watching. MaxTour.co, a travel blog of sorts, ranked the NFL team fanbases by their level of passion (using the following metrics, online/social media presence, attendance, loyalty, sellout score and other expert rankings).

The Minnesota Vikings were the fifth most passionate fanbase, trailing only the Patriots, Seahawks, Eagles and 49ers. The Chicago Bears were sixth, Green Bay Packers 10th, and Detroit Lions a number that NASA is currently tabulating. 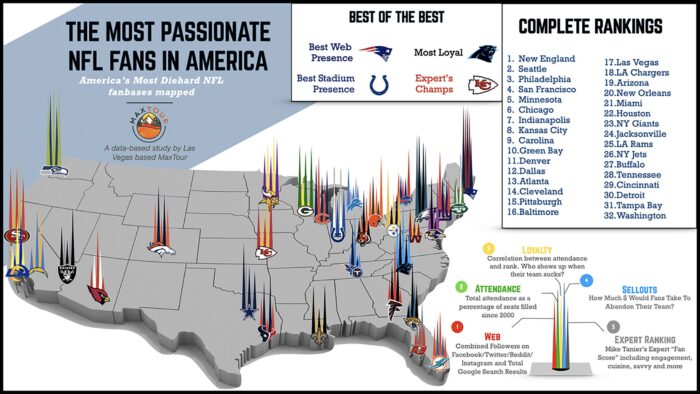 Here’s a description from MaxTour.co on each data point:

Web Presence: Teams were ranked 1-32 in 5 categories: Number of Instagram followers, number of Twitter followers, subscribers to their subreddit, Facebook pages likes, and results when searching the teams name in Google. All 5 scores were added, and the team with the lowest score was #1 all the way to #32.

Attendance: Teams were ranked 1-32 based on attendance as a percentage from 2000-2019. Sources: http://www.espn.com/nfl/attendance/_/year/2019/sort/homePct https://www.pro-football-reference.com/years/2019/attendance.htm

Loyalty: Loyalty Score provides a ranking of all teams (1-32) based on their correlation reading R between their league standings and home attendance ranking. The closer a teams R is to zero the weaker their correlation between attendance and league standing. That is, the closer one’s R is to zero the less indicative it is of that team being said to have a “bandwagon” fan base. At the other end of the spectrum, those whose R is further from zero, indicates a stronger correlation between attendance and league ranking, and therefore more reasonably accused of showing signs of a bandwagon following.

Sellout Score: The Sellout Ranking ranks teams based on a study conducted by Reviews.org to determine how much money home team fans would accept to root for a rival team. The lesser amount of money in such an exchange does worse for the team’s reputation for having passionate fans. The greater amount of money required to root for a rival says more about the allegiance of that team’s fan base. Source: https://www.reviews.org/trends/nfl-fan-loyalty/#Where_Does_Your_Team_Rank_

Expert Ranking: The Expert Ranking is based on the July 2019 article by Bleacher Report’s lead NFL writer, Mike Tanier. In it, Tanier develops a Fan Score based on the following categories (including decimals): Engagement (1-10), Cuisine (1-10), Savvy (1-10), and Internet Personality (-5 to +3). He then puts them together cumulatively to produce a “Fan Score”. Our adaptation is simple: Rank the NFL teams based on Tanier’s Fan Score. The higher the Fan Score the better your team’s ranking. Not exactly based on math, and therefore entirely subjective, but if it’s good enough for BR, it’s good enough for us.