Vikings Cross into NFL’s Top Half of Power Rankings 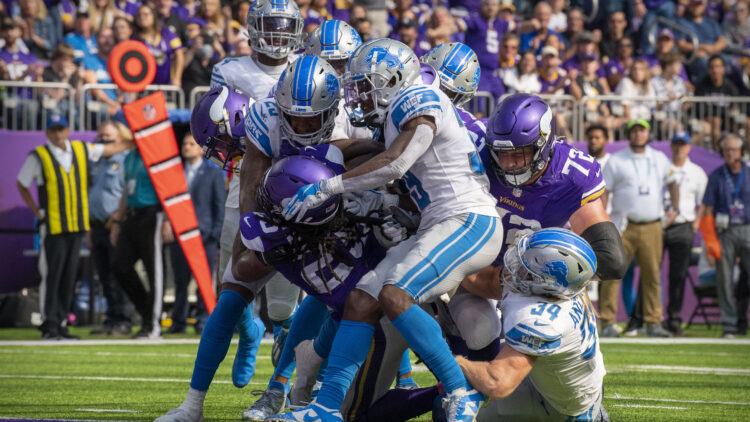 The Detroit Lions fell to the Minnesota Vikings in rough fashion, coughing away a stunning comeback victory at U.S. Bank Stadium on Sunday.

Well, both teams coughed away certain victory. The Lions cough was just the last wheeze of the afternoon.

Minnesota moved to 2-3 for the 2021 season thanks to a survive-an-advance strategy in Week 5. It was ugly and unbecoming of a team hoping to reach the postseason. Regardless, it was a win, and the Vikings are one game away from a .500 record. If Minnesota can topple the Carolina Panthers on the road this weekend, they’ll jet to a 3-3 record, eyeing “it’s a new season” vibes heading into the Week 7 bye.

Due to merely winning over Detroit, the Vikings national stock climbed as well. Evidently, it did not matter the win was sloppy. In NFL.com’s power rankings, the Vikings jumped two spots from #17 to #15. Beating the Lions has perks. Dan Hanzus of NFL.com wrote about the after-Week-5-Vikings:

“No Dalvin Cook? No problem! That was the general sentiment — perhaps not behind the scenes at Vikings headquarters — but around the team as it prepared for the winless Lions on Sunday. Naturally, Minnesota found itself in a street fight against Dan Campbell’s scrappy group, which pushed the Vikings to the brink before the kicker saved the day. Greg Joseph hit four of five kicks, including the 54-yarder as time expired in a 19-17 win over Detroit. It was a redemptive moment for Joseph, whose miss from 37 yards out cost the Vikings a win over the Cardinals in Week 2. Still, concerns linger over an offense that looked all but unstoppable in the season’s first three weeks. Is it a simple slump, or a sign of bigger issues?“

Minnesota is now bedfellows per reputation with these teams: #13 Carolina Panthers, #16 Pittsburgh Steelers and, and #17 San Francisco 49ers. Interestingly, the Vikings will play all of those teams before the 2021 season wraps up.

Head coach Mike Zimmer is still waiting on his team to paste together a complete game. When the offense is humming – Week 1 thru 3 – the defense is porous. The defense improved markedly after Week 3, but the offense decided to defecate on the field. Vikings fans do not know the full potential of the group because all pieces of the team never his stride simultaneously. Good NFL teams normally do that by now, so the Vikings exist in believe when we see it territory.

Fortunately for Zimmer, his rookie left tackle Christian Darrisaw is getting more playing time after, what appeared to be, a segue for the man to miss a lot of the 2021 season. Darrisaw underwent a late-summer surgery, and cynical Vikings onlookers figured that meant he was as good as shelved for the 2021 season. That was false, and Darrisaw took meaningful snaps in Week 5 against Detroit. And he looked good.

The Vikings are one-point underdogs at the Panthers this weekend.