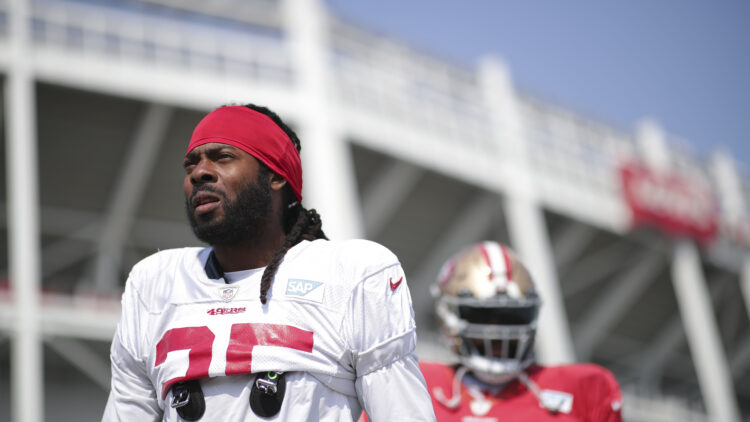 Cousins’ 2021 so far is the best start to a season to date amid his seven seasons as a starter, and folks are beginning to afford him some credit. It’s not widespread and conclusive, but the newfound praise for Cousins is noteworthy.

Even prominent allies are backing Cousins. One, in particular, is a man who plays defense for a living – Richard Sherman.

Sherman is a cornerback for the Tampa Bay Buccaneers, previously spending time with the Seattle Seahawks (winning a Super Bowl) and the San Francisco 49ers for a few years. The veteran cornerback got into trouble off the field last summer but eventually found a roster spot in Tampa.

On Wednesday, he was on a podcast with Vikings wide receiver Justin Jefferson, and the Kirk Cousins topic was on the agenda. Folks usually have strong opinions on Cousins – rather extreme ones, at times – so discussing his resume as a player is nothing new. Sherman and Cousins have crossed paths on the football field about four times, so Sherman isn’t tossing out his opinion on Cousins without firsthand experience. Here’s what he said about Cousins:

“Kirk Cousins, people give Kirk a lot of hell, but Kirk can play. They never give him the credit he deserves. When he playing well, they like, ‘Oh okay. He doing alright.’ But when he makes a few mistakes, they want to jump on his back.”

That was from The Richard Sherman Podcast, and Cousins’ teammate, Justin Jefferson, agreed with Sherman, complimenting his quarterback along with the Buccaneers defensive back.

If Cousins can keep up his blistering pace, he stands to surpass 5,000 passing yards while getting close to the 40-touchdown mark. In past seasons, the 33-year-old would start a bit slow in September and then step on the gas pedal in October and November.

But not this year.

Cousins has performed marvelously since Week 1, leaving some fans to wonder if his theatrics will continue beyond October. Usually, Cousins’ best month is November, causing Vikings dieharders to label the month Kirkvember.

The Vikings were not forecasted by Vegas to reach the postseason in 2021 – some sportsbooks still believed Cousins wasn’t any good – but they’re gradually righting the ship. Minnesota is 3-3 through seven weeks of 2021, hosting the 5-1 Dallas Cowboys in Week 8. The next several games for the Vikings are deadly for strength of schedule, but Cousins will be expected to find a pathway to victory regardless. Per average annual salary, Cousins is the NFL’s eighth highest-paid quarterback, so he is compensated like a dude who can beat the 5-1 Cowboys in primetime. We shall see.

But hey, Richard Sherman believes in him.

Also Read: The Vikings Most Surprising Player in 2021 from a National Viewpoint