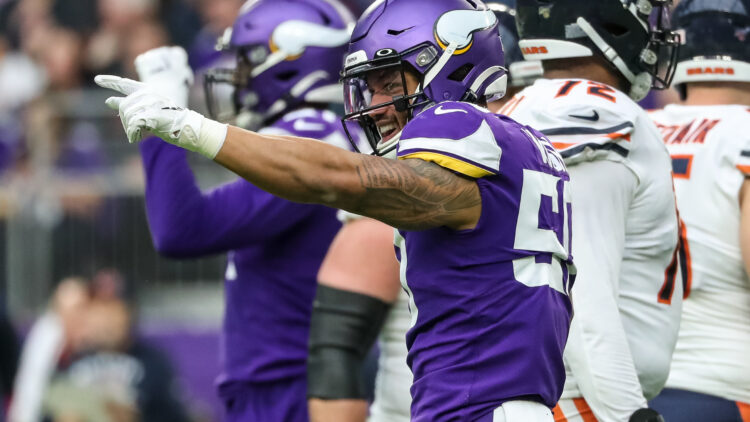 Former Minnesota Vikings linebacker Eric Wilson has not been signed by an NFL team through two weeks of free agency.

The legal tampering period of free agency began two weeks ago on March 15, and most of the star-studded names [and the players in the tier beneath those men] have agreed to deals with various franchises.

For the Vikings, the free-agent plan via new faces is incredibly singular. General Manager Rick Spielman has signed solely defensive personnel to date. He must feel that the team is pretty well set on offense – even though the offensive line is needed of two starting personalities. The NFL draft transpires in one month, however. So, Spielman has ample time to finally remedy the Vikings longstanding pass-protection woes. That’s “believe when you see it” stuff.

None of those players is named Eric Wilson, and no other team has made Wilson a priority.

Perhaps Wilson is asking for too much money. That is – overvaluing his performance. Wilson puts fine highlights on tape. He is a playmaking force that even earned the moniker “walking turnover” from Vikings All-Pro linebacker, Eric Kendricks.

In 2020, Wilson played in all 16 games for head coach Mike Zimmer – a rarity among defensive personnel as the team was snakebitten by injuries. Wilson tallied 122 total tackles (by far a career-high), nine quarterback hits, eight tackles-for-loss, three interceptions, three sacks, two fumble recoveries, and one forced fumble. In this respect, Wilson was also a walking statistic. Or — a Swiss army knife.

His pass coverage was fantastic. Wilson was targeted 65 times by opposing quarterbacks, resulting in a low 74.3 passer-rating-against – a mark rather commendable for a linebacker (or any defender).

His year-end Pro Football Focus grade was 53.5 – which not very noteworthy. Therefore, his raw statistics did not match his game tape, evidently. And that might be why he is not commanding top dollar as of yet.

His PFF score was dragged down by his run-defense acumen. He graded at 38.3 last season in stopping the run, and that is rather awful for any defender. And it’s particularly strange because Wilson does everything else with esteem.

Tackling is not his forte – when compared to other linebackers with his skill set. Wilson notched a 12.2% missed tackle percentage in 2020. In 2019, Anthony Barr – the man that Wilson effectively replaced in 2020 – carried a 2.5% missed tackle rate.

Below-average tackling and generally poor run-stopping should not disqualify Wilson from joining another NFL team. But such organizations are understandably skittish about ponying up stacks of cash when Wilson is not the total package.

Too, non-EDGE linebackers do not frequently fetch big paydays. Some pre-free agency reports speculated that Wilson would receive around $9 million per season. It is severely improbable that Wilson will receive that type of contract – or anything close to it – with two weeks for free agency elapsed. Put bluntly, NFL teams are cash-strapped due to the coronavirus shackling, and the chances of Wilson getting a handsome contract dwindle as each day goes by.

So, that makes a reunion with the Vikings more likely. In Spielman’s first press conference of the offseason – the one when he firmly committed to quarterback Kirk Cousins – he seemed pessimistic on the probability of bringing Wilson back for 2021.

Yet, that was well before Wilson garnered little attention on the open free-agency market. If a veteran player like Mackensie Alexander can sign with the Vikings at a league minimum as he did last weekend, it is somewhat reasonable that Wilson could be back with Minnesota at a tiny price tag.

Think of it as a prove-it deal springboard to 2022 – when the salary cap will bloat.

Otherwise, the Vikings have two options. First, they can start newly-acquired linebacker, Nick Vigil. He’s a 27-year-old defender that spent four seasons with the Cincinnati Bengals and one year with the Los Angeles Chargers before joining the Vikings a couple of weeks ago.

Or the team could spend its 1st-Round draft pick on a brand new, shiny rookie linebacker. They’re out there – Micah Parsons from Penn State or Jeremiah Onwusu-Kormoah may be available to the Vikings with their 14th overall pick.