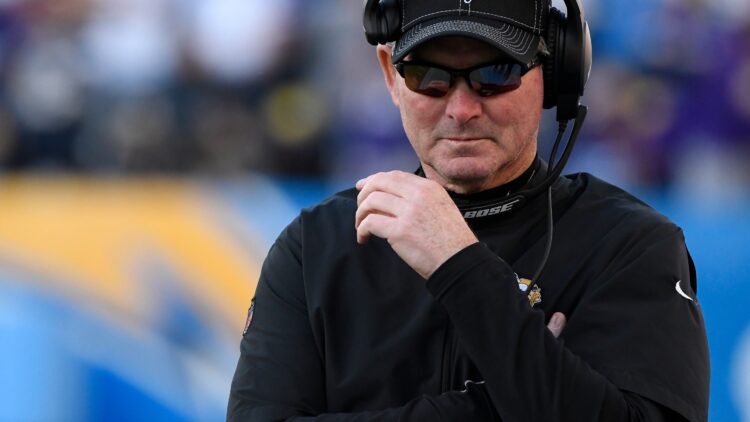 When a team like the Minnesota Vikings – submerged in win-now mode annually – has a downtrodden season, the coach is rightfully held accountable. The Vikings finished 2020 with a yucky 7-9 record after players like Danielle Hunter, Michael Pierce, Anthony Barr, and Mike Hughes missed all or some of the season.

Stefon Diggs was traded about one year ago and – surprise, surprise – that was Zimmer’s fault. Well, it was also Kirk Cousins’ fault, depending on the spin zones that one follows. Diggs wanted to be the focal point of an offense. The Vikings said, “naw, we got Dalvin Cook and Adam Thielen, too.” After months of strange tweets expressing apparent malcontent, Diggs was jettisoned to Buffalo for [what turned out to be] Justin Jefferson, Kenny Willekes, and three more draft picks upcoming in the 2021 NFL Draft.

Was Zimmer praised for implementing Jefferson into the offense, a place where he set the NFL record for rookie receiving yards? Nope. He is chided – to this day – for “letting Diggs go.”

The Vikings fan stratosphere is an odd, nonsensical place at times.

The anti-Zimmer fervor took a hit this offseason – at least among those that insist the man is a curmudgeon that no reasonable NFL player wants to be around.

The principal dagger to “Mike Zimmer should star in Gran Torino” fodder involves Patrick Peterson. The 30-year-old All-Pro cornerback joined the Vikings a little over a week ago. Few foresaw Minnesota securing his services. And there is a good reason for that.

Peterson reached out to the Vikings to make a deal happen. General Manager Rick Spielman didn’t find it realistic to bring him aboard in Minneapolis. Peterson has been in the NFL for a decade, so he knows things.

It is extremely unlikely that – at a pivotal point in his illustrious career – Peterson would join a team led by an uncouth, hard-hearted head coach. The inverse is the reality, in fact. Peterson gravitated northward because of Mike Zimmer. Whooda thunk it?

Peterson said of Zimmer in his introductory press conference, “His teams are just well prepared and they just have a relentless mindset.”

A defensive end that made a one-year voyage to the Carolina Panthers returned home this offseason, too. His name is Stephen Weatherly, and there is a chance he starts at the RDE spot in 2021.

Weatherly believed he would travel to North Carolina and tear stuff up. His 2020 campaign was beset by injury while stardom did not take off with the Panthers. He even admitted to a bit of complacency when departing the Vikings.

Now Weatherly is back. He did the one-year of dorm room-living trick and then returned home to live with his parents because he realized it was the best thing going for a while. Weatherly probably wouldn’t have done so if Zimmer was a merchant of relentless malignancy.

Weatherly took it to the extreme when he became the Vikings first 2021 free-agent signing. He was giddy. He is giddy to be back – a very bizarre happening for a coach said to be the beholder of locker-room toxicity.

So Does Mackensie Alexander

And then on Friday night, Alexander signed on the dotted line – at the smallest possible price a player can negotiate. He will be a Viking in 2021, if only for one season. Alexander is familiar with the system, Zimmer, teammates, etc. He did not want to start fresh by learning something totally brand new.

On Zimmer, Diggs, and everyone else linked to the toxicity argument, sometimes relationships don’t work out. In other situations, players merely want something different. Diggs wanted to be showcased in an offense as a standalone commodity. His wish was granted in Buffalo. Everybody is happy. The Vikings received a remarkable talent in return. Three more players will be announced at the end of April as the end-game of spoils from the Diggs trade.

But each time that a former player returns to Minneapolis or a renowned free agent puts on a purple helmet, the anti-Zimmer hubbub looks sillier and sillier.