To Joe Johnson in Valhalla — Skol, My Friend

I didn’t know Joe Johnson when he was a young high school hockey stud for Edison and was pictured, with his sister, a future U of M goalie, Stephanie (and a couple other promising players) on the sports page of the Star Tribune. But I would have liked to have met him then. He must have been a terror. 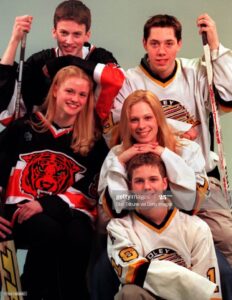 Sports, as in life itself, often favors the bold, focused, and hard-working — all three attributes that describe my friend, Joe, who tragically passed away earlier this week. We met about seven years ago when VikingsJournal.com was nearing its last legs and Joe was working there while building his own sports publishing network on the side. He was already a dynamo with his work ethic, his desire, his Purple passion, and his unique and ever-present sense of humor. We hit it off right away.

As VJ was ending, I thought my Vikings writing career was as well, until Joe coaxed me to join him on purplePTSD.com. Joe had a way of making any opportunity sound great, which is important in the crowded internet sports-writing business. He gave me the impression that he knew what he was doing, and I wasn’t finished saying what I wanted about the Vikings. Moreover, I wanted (if there was any way I could) to help him get his site off the ground and see where it could go. In my career, plenty of sites had come and gone, but Joe’s passion shone through, and I thought it was worth the chance to join him.

Suffice it to say, we had a blast. I had long been a professional writer, but soon after I started writing for Joe’s site, he asked me to join him on a podcast, which — to an aging ink-stained wretch — was a bit of a foreign word. We started by meeting at the Mermaid Bar in Mounds View (with VWO member and Vikings superfan Skolt) and began recording “Three Deep,” our podcast’s first iteration.

I quickly wondered what I had gotten myself into. The three of us, joined by the occasional on-site listeners (Joe’s parents, who would help him carry recording equipment into a backroom in the bar) recorded a weekly show, frequent technical difficulties be damned. It quickly became addictive fun, as Joe’s infectious enthusiasm hooked me.

The venture was short-lived, but Joe and I continued in a new iteration of the podcast as his site began to grow. Always the positive force in everything he did and with everyone he encountered, Joe, by fits and starts, began recruiting local writers and podcasters to his site. Every ounce of his being went into the project — evidenced by how he (a sober alcoholic) worked in a liquor store to raise enough money to pay writers and keep them around. There was a time when (as he said on the podcast) he was on food stamps and lived with his folks because everything he had gone into the sites.

It was amazing to watch him work. One site became two, and then Joe eventually built VikingsTerritoryrRadio to host podcasts. And what began as a fledgling endeavor to live out a dream grew into an online network that could not be ignored amongst the myriad websites devoted to covering the Vikings. As local longtime sportswriter and now podcaster Bob Sansevere told me recently, “Joe was a savant when it came to monetizing websites.” And he was doing just that, working hard to achieve his dream of paying writers a living wage — something as difficult to do as it is for the Vikings to win a Super Bowl. He was zeroing in on it, which included renting office space in downtown Minneapolis for his growing staff when his untimely demise occurred. It breaks my heart to realize that his dream ends so close to fruition.

But Joe was so much more than the businesses he created. While filled with passion and emotion that could rise and fall like a ship on high seas, Joe tried to make everyone he worked with feel better in his presence. Joe was a very good salesman, so I often had to temper my views of some of the promises he made — as I knew this business and how difficult it is to make those promises happen. But when I think about it now, I realize that was Joe’s way of thinking his dreams into existence. Personally, I avoid mentioning something that could happen (like a Vikings NFC title win) for fear of jinxing it, whereas Joe’s modus operandi was that if you wish for something, you can say enough to will it into reality. And he did that with the Uffda! Sports network.

In fact, early on I had to ask myself if Joe was selling me, but over time I came to feel differently. I will never forget when he first told me that he considered me his mentor because I counseled him about the business and helped with his writing, which he dearly loved. I had never been called that before, and just hearing it had a profound effect on me. I felt like my career — which had entered its fourth quarter a few years before — was worth something again. He gave me a place to write about the Vikings, but he made me feel like an even bigger contributor to what he was doing it. If it was a sales pitch designed to keep me around, it was a damn good one.

But it wasn’t — Joe was too genuine for that — and I was reminded of it every week on our podcast. Despite whatever struggles he was having with the business or his personal life, for that one hour a week, he put it aside and we rejoined our friendship. From the get-go on the air, we fit together seamlessly despite coming from different generations. I was the seasoned Vikings reporter/fan (who had seen too many Vikings Super Bowl losses), and he was the impassioned Purple ambassador who loved the game in large part because his dad raised him on it. We discussed and argued and chided and praised and laughed — we laughed a lot. He made me laugh with his offbeat sense of humor and also generously laughed at my wordplay or dad jokes.

As I said, we had a blast, and even though I pulled away from writing after last season to focus on some writing projects of my own, we kept the podcast going because we loved it. I came to look forward to it every week because I enjoyed hearing Joe’s take on the Vikings. It made for great radio (I hope) and sure made for great fun.

And now Joe’s voice is silenced, and I am at a loss in his passing’s wake. When this Wednesday rolls around, there will be no show agenda coming to me via text, no Vikings storylines to consider. No laughing into a computer microphone. The silence saddens me and will be something tangible to move past. But I hope that Joe’s legacy does not go silent; I hope the great network he spent his life and his energy to build continues and grows and thrives like some tall tree ever-stretching to the sky. I hope.

Like Andy Dufresne (nee Tim Robbins) said in the movie Shawshank Redemption, “Hope is a good thing, maybe the best of things.” That movie was a favorite for both Joe and me, and we talked about it on the podcast from time to time — as hope is what Vikings fans live on. But when I think about what Joe built and how he did it and what he meant to all those other writers he recruited and fostered and helped live out their Purple Dreams, I am reminded of this quote of Red (Morgan Freeman) from the same movie:

“Sometimes it makes me sad though–[Joe] being gone. I have to remind myself that some birds aren’t meant to be caged. Their feathers are just too bright. And when they fly away, the part of you that knows it was a sin to lock them up does rejoice. But still, the place you live in is that much more gray and empty that they’re gone.

“I guess I just miss my friend.”