The Vikings Loss of Irv Smith Jr. Is Brutal 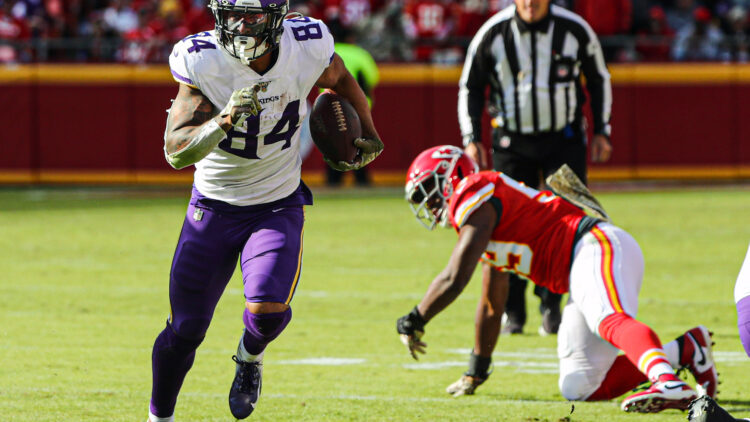 The mini-curse of bad things happening to the Minnesota Vikings just a season starts is alive and well. And the trend largely affects head coach Mike Zimmer.

Vikings’ TE Irv Smith underwent surgery to repair his meniscus this morning. With a 4-5 month recovery timetable, it is most likely to end his season, per sources.

This news affects Smith terribly because 2021 was forecasted as his breakout season after the exodus of Kyle Rudolph to the New York Giants. In his third year as a pro, the time was now for Smith.

But that hype is delayed after his meniscus surgery, presumably setting the stage for a 2022 return. Incidentally, that will be the final year of Smith’s rookie contract.

Whether it’s the career-altering injury to Teddy Bridgewater from 2016, the death of Tony Sparano in 2018, Danielle Hunter’s neck malady last year, or now this – something always derails the best form of the Vikings under Zimmer from getting full acceleration.

Zimmer’s Vikings never fold or mope around with a “woe is me” mindset, though. In 2017, Minnesota lost its starting quarterback and running back, creating a ceiling of about seven or eight wins as the working theory for the team’s chances. Zimmer responded by guiding the franchise to a 13-3 record and an NFC Championship appearance. So, it’s not like the Vikings are doomed. In all likelihood, they’ll find ways to make the offense tick without Smith.

Yet, the nuisance of the Smith injury disables his talents from enhancing the offense. He was supposed to be better than the status quo. With Tyler Conklin and the newly-acquired Chris Herndon, the Vikings will not be lost or awful. But Smith was the special sauce. There is no TE special sauce now.

What’s more, the Vikings offense was pathetic in the preseason. When the first-teamers played – the sample size was teensy – new offensive coordinator Klint Kubiak kept everything vanilla and underneath for quarterback Kirk Cousins. It wasn’t until the final preseason game when the offense showed seedlings of excitement.

Smith is essentially a wide receiver trapped in a tight end’s body, ensuring he’s a mismatch to most NFL defenses. The Vikings are back to the TE drawing board without him. They’ll have decent or good TE production. The theorized breakout season from Smith created the potential for great TE output.

Finally, Minnesota will now be forced to lean on a WR3 more so than they planned this summer. Uh oh.

For most NFL teams, that’s a “no problem” type of request. However, the Vikings have not empowered a WR3 to thrive since Jarius Wright – four years ago – and even he wasn’t a herculean contributor. Wright was damn good and reliable but not Jake Reed-like.

The 2021 Vikings will need someone to be a true-blue WR3 – not this committee stuff on display in 2019 and 2020 with Bisi Johnson and Chad Beebe.