The Vikings Have a Losing Record for 2 Reasons 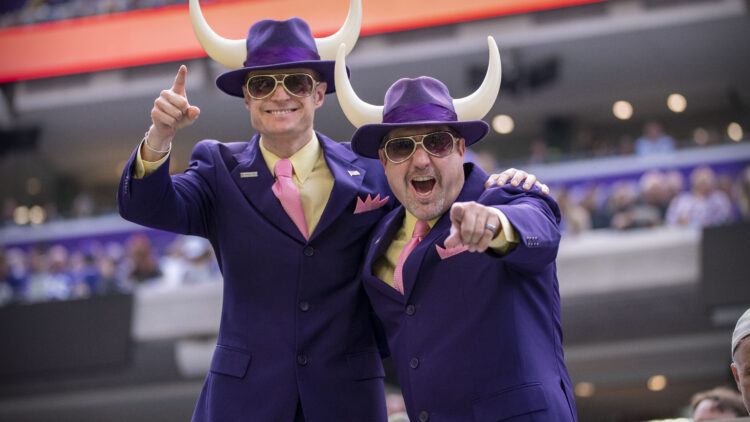 Oct 10, 2021; Minneapolis, Minnesota, USA; A general view of a Minnesota Vikings fans during the game between the Minnesota Vikings and the Detroit Lions at U.S. Bank Stadium. Mandatory Credit: Jerome Miron-USA TODAY Sports

For a few weeks to begin the season, the Minnesota Vikings offense looked fine, scoring points right and left in the first halves of games. But the defense was still a little swiss-cheesy, indicating it needed time to jell on the fly.

In Week 4, the offense – and its playcalling – faceplanted for unknown reasons while the defense began to stifle opponents. Indeed, offensive operations inside the games versus the Cleveland Browns and Detroit Lions were crummy.

The Vikings have not played a complete game yet in 2021.

Mike Zimmer’s bunch got close a couple of times at the beginning of the season. However, the team sits at 2-3 with a mission statement of must-win heading into Week 6 at the Carolina Panthers.

On the whole, there are two reasons why Minnesota has a losing record right now.

First, the obvious reason just has to be mentioned. Failure to reference it would be a dereliction of analysis. If Greg Joseph hit a reasonable, game-winning field goal, the Vikings would be 3-2 and in the thick of the early playoff hunt. What’s more, they’d own a win over the best team in the NFL – or at the very least, the NFC. The Buffalo Bills are trying to seize the title of best team in the NFL after disemboweling the Kansas City Chiefs on Sunday Night Football.

No matter how you dice it, the 2021 Vikings season would feel markedly different through five weeks if the kicker converted a simple clutch task. This is not an indictment on Joseph – he started the process of atonement last weekend – so take the first observation with a grain of salt. The man missed a kick he should have drilled, and his team lost because of it. He’d even tell you that.

Next, Minnesota is not scoring touchdowns on offense in the second halves of games. It’s deadly. Only the Vikings and Chicago Bears have scored fewer than three offensive touchdowns in the second halves of games through five weeks of 2021. Minnesota’s offense is shrinking when the game is on the line – it should be actionizing the opposite tendency. During the last two weeks, the playcalling was abysmal. Conservatism seeps in, mandating for some reason the Vikings merely need to run out the clock to find wins. That garbage does not work in the modern NFL. The strategy might have worked 30 years ago – it probably didn’t – but it emphatically isn’t congruent with the offense-happy league right now. Leads are not safe. This is like the emergence of emphasis on the three-point shot in the NBA – leads aren’t secure in that league either. Teams cannot sit on things and hope to be successful.

Zimmer insists on safeguarding leads with defense, a group just starting to hit stride in the last two weeks. Before that, his defense fundamentally wasn’t good enough to nurture a 7 to 14 point lead. But he still believed that was a good idea.

The Vikings must open the lid on the Pringles can in the 3rd and 4th quarters. Nobody cares if the first half was prosperous. NFL games are won in the final two quarters. If anything, Minnesota should slow-roll offensive stuff in the first half, preferring to open up creativity in the second half – if they absolutely require it to be one or the other.

One final note: The Vikings have not scored an offensive touchdown in the second half of a 2021 game when the score margin was within seven points. Not gonna cut it.