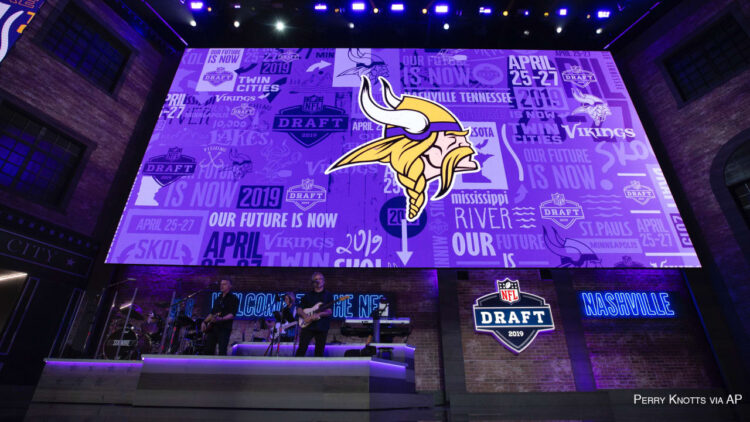 Image via Perry Knotts of the Associated Press.

Bleacher Report released another mock draft on Friday, and analyst Maurice Moton sent a defensive tackle to the Minnesota Vikings.

With the 14th pick in the 2021 NFL Draft, the Minnesota Vikings selected Christian Barmore, a 3-technique defensive tackle from the University of Alabama. Just like Justin Jefferson last season, Minnesota would snag a national champion in the 1st Round of the draft.

On Barmore to the Vikings, Moton detailed:

“The Minnesota Vikings have major questions across their defensive line—most of it around edge-rusher Danielle Hunter. Hunter missed the entire 2020 season because of a herniated disk, which required surgery. According to NFL Network’s Ian Rapoport and Tom Pelissero, the Vikings could face a tough decision to pay or trade him this offseason. In case things go awry with Hunter, general manager Rick Spielman should address the pass rush. The Vikings ranked 28th in sacks (23) and were tied for 29th in quarterback pressures (116) this past season. Among the top edge-rushing prospects, Kwity Paye had limited sack production at Michigan. Miami’s Gregory Rousseau may need time to make an impact after he opted out of the 2020 season. Minnesota should look at an interior pass-rusher instead. Alabama’s Christian Barmore recorded eight sacks this past season, including two during the College Football Playoff. After such a strong finish to his collegiate career, his arrow is pointing up. For a 6’5″, 310-pound defensive tackle, Barmore possesses unique quickness with complementary strength. His short-area burst will catch guards by surprise, leading to constant pressures up the middle. He brings the type of aggressiveness that the Vikings need at the 3-technique spot.”

The choice of Barmore for the Vikings is certainly in-bounds for team-need and [arguably] best-player-available sentiments. For the first time since Sheldon Richardson in 2018, the Vikings would again have a pass-rushing threat at the 3-technique spot on the defensive line.

Vikings Would Have Best DT from 2021 Draft

The sunshine-and-rainbows take with Barmore-to-Minnesota is that the Vikings would hold the very best defensive tackle from the 2021 draft on their roster. Barmore is universally considered the top defensive tackle in the draft class per DraftTek, SI.com, Walter Football, and others.

The days of plug-and-playing Shamar Stephen and declaring him a damn-good DT [despite widespread objection] would cease. Stephen would not even slide over to nose tackle in 2021 as Michael Pierce is slated to return from his 2020 coronavirus opt-out. On Stephen, he is likely heading toward a new football team next season. His contract is a bit too large to remain on the Vikings at the current price tag.

Recommitment to Odenigbo/Wonnum or Free Agent at DE

The primary grievance in emphasizing defensive tackle instead of defensive end during the draft is the “then what?” Barmore joining the Vikings would predict that Minnesota is content with Ifeadi Odenigbo, D.J. Wonnum or both at the right defensive end spot. Those men played fairly well in 2020, but neither man [yet] is a player that can hold down a defensive line as the showstopper – like Danielle Hunter does. Hunter will return from a neck injury in 2021, so whomever plays on the opposite end of the line figures to be set up for some semblance of success.

In choosing Barmore, the Vikings are disqualified from selecting Kwity Paye from Michigan or Gregory Rousseau from Miami (FL). This boils down to which spot is a more-dire need – DT or DE? It is debatable.

Drafting a DT ensures that the Vikings roll into 2020 as-is for defensive end personnel or they sign an affordable free agent like Everson Griffen.

Spending the 14th pick on any defensive lineman indicates the Vikings will forego the selection of an offensive lineman in the 1st Round – a weird strategy for a team that habitually stinks with pass protection. In fairness, though, Minnesota needs offensive guards that do not dangle near the bottom of the NFL for performance. And guards do not typically fly off the draft board early in the draft.

In 2020, the franchise employed Dru Samia and Dakota Dozier at guard. Neither man was very successful. It is extremely improbable that Samia or Dozier are tapped to start next season.

So, a DT or DE in the 1st Round would suggest that general manager Rick Spielman unearthed a competent starting OG from free agency.

It’s been a while since that happened, but one can dream.