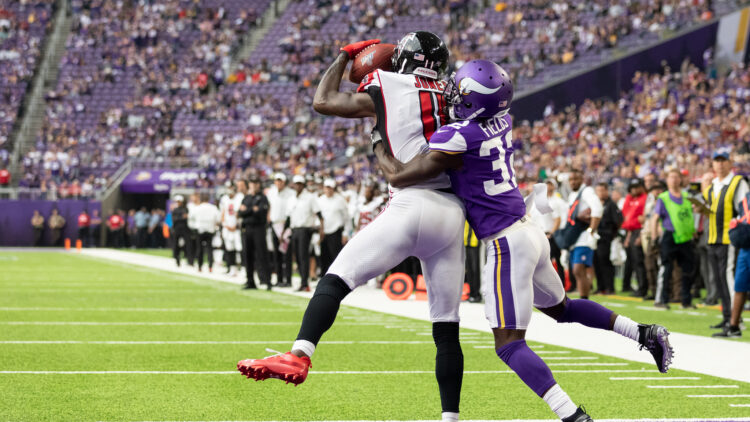 Note: This article originally appeared on our nationally-themed site, FranchiseTagged.com. The wide receiver balance of power shifted from the NFC to AFC on Sunday as the Julio Jones Sweepstakes finally punctuated. Jones was reportedly dealt to the Tennessee Titans after an offseason-long standoff with the 32-year-old and his now-former team, the Atlanta Falcons.

Sources: The #Falcons are trading All-Pro WR Julio Jones to the #Titans in exchange for at least a 2nd round pick. A blockbuster for Tennessee, who now gets the coveted big-play threat. And Atlanta ends up with very nice value.

Jones spent 10 seasons in Atlanta, reaching the Super Bowl in 2016 when the Falcons infamously collapsed at the feet of the New England Patriots. Since his entry into the business in 2011, Jones leads all pass-catchers in receiving yards — 12,896 in 10 years. The second-place contestant, Antonio Brown, accrued 11,579 receiving yards in the timeframe. Now, Jones joins a team notorious for running the football. On paper, Jones should usher in an era of offensive balance for Tennessee — so long as Titans skipper Mike Vrabel commits to throwing the football. Vrabel took over Titans operations in 2018, carrying the franchise to the postseason in two out of three seasons. The Titans even reached the AFC Championship — rather unexpectedly — in 2019 before falling victim to Patrick Mahomes’ rise to power. In Vrabel’s three seasons, the Titans have rushed the football 1,422 times or fourth-most in the NFL. That total must shrink with Jones waltzing onto the depth chart. Relying on the rush with A.J. Brown and Julio Jones hungry for passing targets would be foolhardy. On the other side of the coin, Titans halfback Derrick Henry is the most utilized rusher over the last few seasons, so a pivot to passing emphasis may bode well for the long-term prognosis — at least in terms of sustainability. To be clear, Henry will not be ignored, but his workhorse reputation should take a bit of a tumble with Jones joining Vrabel’s offense. This weekend, reporting suggested that Jones wanted to play with a “big-armed quarterback.” That evidently is Ryan Tannehill.

If traded, Julio Jones wants to go to a contender, as most big-name players want, but one other thing I've heard intrigues: A big-armed QB that can deliver the deep ball. Jones wants to outrun DBs and get underneath the ball.

In most circles, Tannehill probably wouldn’t be considered a top-name for “big-armed” prowess, but the Titans quarterback does manage to stuff statsheets with deep passes. Since joining the Titans in 2019, Tannehill has completed 22 passes of 40+ yards — fourth-most in the NFL behind Aaron Rodgers, Kyler Murray, and Patrick Mahomes. Several of those were catch-and-runs from A.J. Brown, but big gains are big gains. Tennessee now joins the ranks of the Dallas Cowboys and Minnesota Vikings for two star-studded WRs, a bellcow RB, and a pretty damn good quarterback. For the Cowboys, it’s Dak Prescott, Ezekiel Elliott, Amari Cooper, and CeeDee Lamb. With the Vikings, Kirk Cousins, Dalvin Cook, Justin Jefferson, and Adam Thielen employ a similar foursome. And now for the Titans, it’s Ryan Tannehill, Derrick Henry, Julio Jones, and A.J. Brown. Jones and his new Titans will face the Falcons in Week 1 of the preseason on August 13 — in Atlanta.