The Realistic Next Steps for Vikings at Kicker 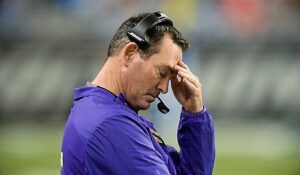 Minnesota Vikings head coach Mike Zimmer pauses on the sidelines during the first half at Ford Field in Detroit on Sunday, Dec. 14, 2014. (Pioneer Press: Ben Garvin)

The Minnesota Vikings raced back to the drawing board at the kicker position on Tuesday. A team long beset by kicker turmoil released its one-time solution, Dan Bailey.

The 33-year-old Bailey succumbed to a career-low for field goal percentage during the Vikings lackluster pandemic season. He converted 15 of 22 field goals for a 68% success rate. The year before, 2019, he drilled 93% of all field goals, leading the Vikings to believe they had “their man” wrapped up for good. But Bailey’s 29.3 Pro Football Focus grade canceled that optimistic plan. And, yes, 29.3 is about as low as a kicker can stoop for a PFF score.

Like the clever girl-meme says, Vikings fans must now put their hair up, throw on some gangsta rap – and deal with it. They’ve been here before.

Recently (relatively speaking), kicking woes are traced back to the 2015 NFC Wildcard Playoff game. Blair Walsh missed a playoff-round-advancing field goal, disallowing Minnesota from continuing its trek down to the desert for a showdown with the Arizona Cardinals that season. The Green Bay Packers made the trip in place of the Vikings. Not ideal.

Since then, kicker dealings have gone haywire. The team has auditioned Walsh [for awhile thereafter], Kai Forbath, Daniel Carlson, and Dan Bailey. None clicked for longer than three seasons. In Bailey’s defense, he was quite effective for two seasons. Then 2020 happened.

On the Roster: Greg Joseph

For about one month, it was theorized that Bailey and a new kicker would duke it out this summer.

Not so fast – said Vikings brass.

On the roster, the team holsters a 27-year-old kicker from South Africa – Greg Joseph. He was educated at Florida Atlantic University and spent time in the NFL and XFL.

In 2020, Joseph was the Tampa Bay Buccaneers emergency kicker on the team’s practice squad. Just two days after his Super Bowl celebration, he took a phone call that would send him to the Twin Cities.

His last meaningful football games occurred with the Tennessee Titans in 2019. He was the team’s designated postseason kicker – and he was perfect. He hit nine extra points on nine attempts (which sounds glorious to Vikings fans). Joseph was also successful on a field goal during the Titans three-game playoff run two seasons ago.

Joseph spent time with the Cleveland Browns before joining the Titans. All told for his career, he has an 85% success rate with field goals and 90% on extra points. Neither of those marks is Justin Tucker-like, but the percentages are not stinky – especially for field goals. His field-goal accuracy is closely aligned with that of Dan Bailey’s career numbers (albeit a substantially smaller sample size for Joseph). On the whole, that is a compliment as Bailey was terrific in most of his career with the Cowboys and Vikings.

Free Agency: A Lot to Choose From

If one has zero faith in Joseph because of puny name recognition, there is hope. Gobs of free-agent kickers will grace the market next week.

Not all of these men will ultimately depart their respective 2020 franchise, but they are currently unrestricted free agents. The Vikings may be sour on “big names” at kicker because Bailey was supposed to be one of those — and solve the dilemma once and for all. He didn’t, at least not for very long.

It is unclear if the Vikings view Greg Joseph as the 2021 kicker or if other men will visit Eagan for a tryout.

As a matter of common practice, kickers are not normally drafted. They generally reach their first NFL team via undrafted free agency. The last time the Vikings drafted a kicker it ended miserably. The year was 2018, and general manager Rick Spielman plucked Daniel Carlson from the 5th Round of the draft. Carlson provided slapstick comedy for a couple of games and his abrupt exodus led the team to Dan Bailey.

In theory, the Vikings could try to strike gold with a rookie kicker. A young man by the name of Evan McPherson from the University of Florida figures to be the most coveted kicker in the 2021 NFL Draft.

If not, then it will probably be The Greg Joseph Show with a teaser-trailer of some other free-agent kicker to challenge him.

One thing is for certain with this search: Not a single Vikings on the planet will feel “comfortable” at kicker heading into the 2021 season. There is simply too much apprehension engrained in the purple souls of folks.