The National Feeling on Bears-Vikings 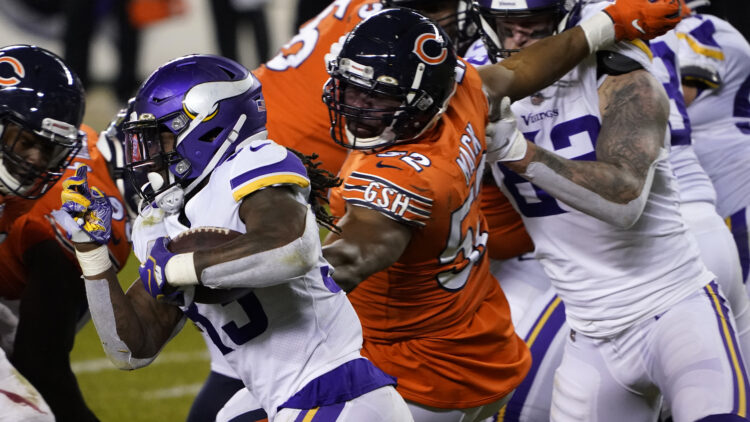 The Minnesota Vikings have been entangled in must-win games per fans’ sentiment for about two months.

Because nobody knows for sure if the team is good, bad, or somewhere in the middle, the next game is always the one that will shed definitive light as a verdict on the state of the team. The game occurs, the Vikings win or lose by a whisker – usually playing to the level of the competition – and mystery remains on the quality of the team.

Wash, rinse, repeat. And they usually toss on a skol afterward.

Week 15 is no different, not one iota. The Vikings travel to Chicago to play the stinky Bears, a franchise that is 4-9 through 13 games. Chicago is not a good football team, uncharacteristically struggling on defense. And that’s while the rookie quarterback who was supposed to have Mahomesian tendencies plays like one of the worst quarterbacks in the NFL. The numbers confirm it for Justin Fields. To be fair, Fields still has a long time to mature. These musings aren’t anti-Fields, instead a look at his paltry numbers so far.

Fields will likely flog the Vikings on Monday Night Football because this season is just that weird for Minnesota – and the purple team routinely plays like dung at Soldier Field. In 2020, the Vikings eked out a victory in Chicago, but Minnesota performs abysmally on the whole in Illinois during the last 20 years.

But that doesn’t stop the masses from predicting the Vikings to win. Vegas oddsmakers favor Minnesota by about three points, depending on the sportsbook. Pundits are even more confident. Per NFLPickWatch.com, a site that hosts all expert predictions in one spot, 86% of notable folks forecast a Vikings win over the Bears.

Some picks have yet to flow into the site, but the percentage will not swing violently when the process is complete. Truth be told – people are strangely optimistic that Minnesota will take care of business. The feeling is a departure from the thoughts of obsessionist Vikings fans – those gurus know games at Soldier Field are assured to be sloppy, so the confidence meter on a Vikings win dips.

The aforementioned Fields isn’t good enough to be considered consistently productive by anybody yet. However, neither was Mitchell Trubisky, the former signal-caller, and the Bears actually had the Vikings number when Trubisky ran the show on offense.

No matter what fans or pundits feel in their bones about the outcome of Monday Night Football, Minnesota’s playoffs aspirations rely on a win. Should the Vikings outlast the Bears in Week 15, their playoff odds spring to 50%. With a loss, the Vikings fall to 11% probability, and fans will focus on new coaches and 2022 mock drafts.

That’s just the way it goes for an underachieving team through three-quarters of the season. Win and stay alive, maintaining fans’ hope for something grander in January. Or lose – and fire everybody returns for at least a week.