The Case for Firing Zimmer pt. 1: The Offensive Coordinator 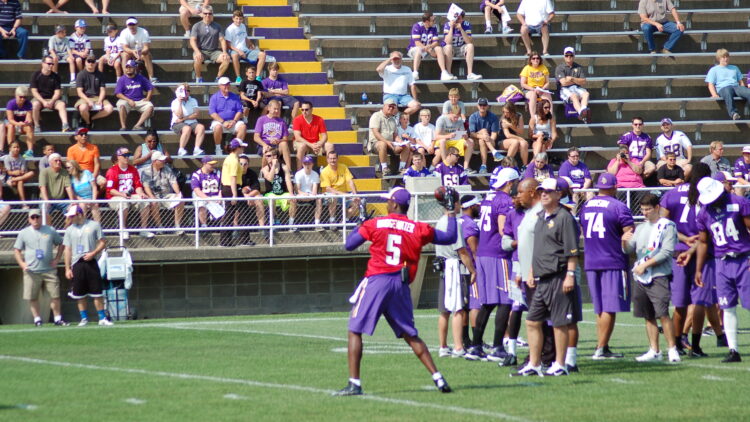 Don’t get me wrong.

At this point? There are a lot of reasons why the Minnesota Vikings should move on from Mike Zimmer. Some are more drastic than others, as you’ll see in this series. Others are just more benign, like the fact that only a handful of NFL head coaches have won a Super Bowl with a team after the five-year mark (and the coaches that have? All Hall of Fame guys with Hall of Fame quarterbacks). I thought that now was as good a time as any to break this down for two main reasons.

First? I, surprisingly enough, speak with a lot of current and former Vikings players that are either still in the league, recently retired, or have been retired for a long time. What I’ve been learning about Zimmer from more than one is something that I will hopefully finish this series with soon, after I cross every T and dot every I. But, it’s the type of thing that shouldn’t not be public knowledge and also the type of thing that crosses over from just normal football/management stuff to being morally wrong.

Secondly? The recent news that Gary Kubiak “retired” brings up the question as to who will even want to come to the franchise in the first place and why this team goes through offensive coordinators like I go through toilet seats.

Thirdly, do you think I should see a doctor?

The topic of today’s piece is that second question. Now, with Kubiak leaving the Vikings will be on the market again for an offensive coordinator. The new coordinator will be the fourth for quarterback Kirk Cousins, which is in and of itself a problem.

It’d be different if John DeFilippo and Kubiak left because of all of the success they had here (like the third OC Kevin Stefanski, or other “left for the good reason” Pat Shurmur), but DeFilippo left because he and Zimmer loathed one another and apparently Zimmer couldn’t tell his own offense to run the ball?

Norv Turner unceremoniously resigned mid-way through the 2016 season. An article from the time states:

“Turner and head coach Mike Zimmer disagreed on the best way to run the offense, according to Albert Breer of The MMQB. It wasn’t a huge rift, but they couldn’t come to terms on the margins of it, the details of the offensive system that needed to be changed in order to better protect the quarterback, get the running game going again, and score more than 20 points a game.”

Again, an offensive coordinator leaves during the season because he and Zimmer don’t agree on something. Shouldn’t that be decided BEFORE you hire the guy(s)?

Beyond that, if it was about protecting the quarterback? We’d have done it by now. The line has been an issue, almost by design, since 2016 so that angle had to be peppered in by someone in the Vikings media department as just another reason why Turner up-and-quit in November when he’d never done that before (or since) despite coaching in the NFL since the Woodrow Wilson administration.

If you read my ‘Things are BAD in Zimmerland’ article you’ll remember that Zimmer had the propensity to sabotage his own offense in practice either to prove a point about philosophy (apparently he hates RPO plays like he hates four way stops).

[Report] Things are BAD in Zimmerland

““There’s a reason Minnesota never injected RPOs into its scheme like every other smart team seemed to after Nick Foles (miraculously) upset Tom Brady in the Super Bowl — Zimmer purposely mucked those plays up and then chastised the offense for being too gimmicky.

It became a running joke with offensive players.

Cheat code in hand, Zimmer called plays to screw them over.”

This was around the time when “head coach of the future” John DeFilippo and Zimmer were locking horns over running the ball more.
“When the offense followed orders and stuck to a steady diet of runs and play-action and screens in practice, Zimmer asked them to run more dropback passes the next practice. They did. They felt Zimmer’s wrath. “What!?” one source remembers him shouting. “We’re a dropback f—— team now?””

But yeah, Turner totally retired so the team could focus on the offensive line? Speaking of the line, as I humble bragged in the intro, I speak with a lot of current/former players and in doing so have talked to some offensive lineman.

One player recently told me that whenever the center would call out what he saw from the defense in practice, you know his job, Zimmer would get irate because it’d “screw up [Zimmer’s blitz packages]”.

Is he trying to win games or just practice?

It’s stuff like that that makes it clear that clearly something isn’t right in Minnesota and also highlights the question as to what young, up-and-coming new-age offensive coordinator prospect would want to come here? Especially considering that the last time we had one, Zimmer fired him before the end of his first season and then replaced him with Kevin Stefanski.

The same Kevin Stefanski that has won NFL Coach of the Year honors everywhere but looked like a huge reach and mistake for Cleveland because Zimmer turns everything into mediocrity like King Midas’ brother, Prince Crap.

Kubiak is perhaps the best example of that, as he was forced to moderate to the point that within a week of talking about his loyalty and friendship to Zimmer and how he loves his job? He retired.

Nowhere in Kubiak’s illustrious career has he been as risk averse as he was in 2020. Some of that made sense, as the defense was such a liability at points that the offense needed long methodical drives to keep their own defense off the field.

The other part though was just Zimmer forcing Kubiak to stifle one of the most talented and dangerous offenses in the entire NFL. Which brings us back to the above unfinished point. What young offensive minded up and comer WOULDN’T want to coach this unit?

Justin Jefferson, Adam Thielen, Dalvin Cook, Irv Smith, Tyler Conklin, the second most accurate QB ever in Kirk Cousins? All locked in for a year or more? But, no one wants to come here and that by itself shows that Zimmer is essentially squandering (and has squandered) the potential of this Vikings team.

Even at its peak, Zimmer’s defense has never been elite. Perhaps elite at a certain stat, like third down stops in 2017, but never all encompassing and stifling like the great Bears defenses we’ve seen over the years, or the Ravens in 2000.

I’ve LONG said that this Vikings team needs an elite offense to compensate for the good defense (that never comes through in big spots). In fact, it’s the first argument I made as the first person in Vikings media to call for the Vikings to go all-in on Cousins in 2018.

But, it’s impossible for this team under Zimmer to create that elite offense because he won’t allow it by design, nor will he bring in the new age offensive coordinator who could do it.

Instead? We’ll most likely hire from within to keep the zone blocking scheme together as we add unnecessary miles to Dalvin Cook who could be as or more effective if they aired the ball out and gave Dalvin the ball 20 times a game (instead of waiting 40 minutes for a 20 yard pass and having games where Cook neared 40 touches).

It’s all bad, despite the fact that this offense was the only bright spot in 2020. Which may seem contradictory but actually shows the potential of the offense as well as the frustration I’m talking about. If this offense did what it did in 2020, considering, could you imagine if they weren’t still running the style of offense we had when Teddy Bridgewater was a rookie handing the ball off to Adrian Peterson in 2014?

I can’t either. Because it won’t happen. At least, as long as Zimmer is here. That’s not to say that I think he WILL be fired right now. He won’t. He’ll get a pass because of the injuries on defense, and we’ll just watch this team spend $200 million guaranteed when all is said and done for a quarterback they didn’t need (considering Zimmer’s reluctance to move into this century offensively), Cook’s body breaks down, and guys like Thielen and Harrison Smith age out.