The Brothers Bruin, Zimmer’s Secret to the Double “A” Gap Success 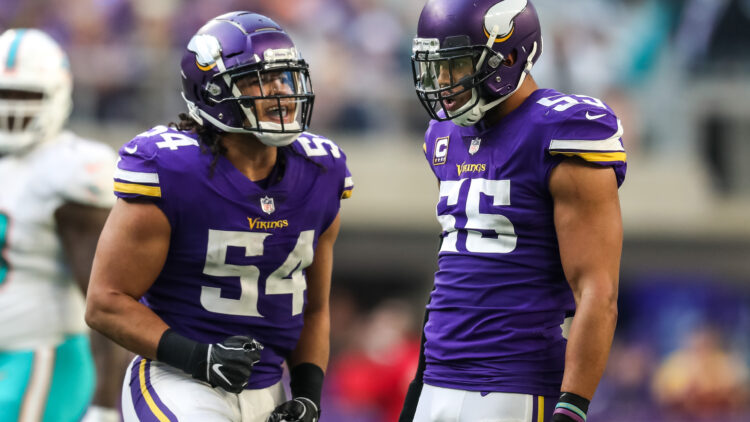 Note: The article originally appeared on our nationally-themed website, FranchiseTagged.com.

Minnesota Vikings head coach Mike Zimmer has earned his respect in the NFL for his defensive prowess. This can largely be attributed to his signature Double “A” gap formation. To get the Double “A” gap formation, the defensive tackles widen out into the “B” gaps and the linebackers walk up into both “A” gaps on either side of the center. The key to the success of the formation is dependant upon the linebackers being good in coverage and athletic enough to rush the passer.

In 2014, Zimmer’s first year at the helm, he was able to draft one of these linebacker prototypes in Anthony Barr. The next year he paired Barr with his former UCLA Bruin teammate Eric Kendricks.

These two, along with safety Harrison Smith, have afforded Zimmer the freedom to roll out numerous wrinkles of the Double “A” to keep opposing quarterbacks on their toes.

Barr and Kendricks were teammates at UCLA from 2010 to 2013 but only formed a dynamic linebacker duo during those last two seasons. Barr began his UCLA career on offense, switching between wide receiver and running back in 2010 and 2011.

After an underwhelming start to his Bruin career on offense, Barr sought out the advice of his high school coach and approached UCLA coach Jim Mora Jr. about a move to defense. That move was an ultra-fruitful one for Barr, and the Bruins as he became an All-Pac 12 linebacker in his first year at the position. Barr would go on to terrorize the conference with double-digit sacks in his final two seasons. As a top 10 draft pick in 2014, it’s easy to see why Zimmer coveted the potential Barr could effectuate.

Kendricks began his UCLA career as a redshirt in 2010. As a redshirt freshman in 2011, he played in 14 games (3 as a starter) and finished second on the team in tackles. Kendricks would lead the Bruins in tackles the next 3 seasons, becoming the tackling machine we Vikings fans have grown to love. Ranked as the top inside linebacker in the 2015 draft, the Vikings and Zimmer pounced on Kendricks in the second round.

Once inserted into the starting lineup as a rookie, Kendricks provided immediate dividends, securing rookie of the month honors over his first 3 starts. The chemistry between Barr and Kendricks became evident immediately, the two would often switch blitzing assignments with a simple hand gesture if an opposing quarterback would shift line protection towards one or the other.

What Do the Numbers Say?

Zimmer’s defense is predicated on a “bend but don’t break philosophy”. He is willing to surrender short and intermediate yardage on early downs in hopes of having longer yardage situations on third or fourth down. There are a few different ways to measure the success of this philosophy. The Vikings under Zimmer, excel in two particular areas, touchdowns surrendered and points allowed.

Barr and Kendricks have been a key to the defense’s success in these areas. Kendricks’s patience and awareness compliment Barr’s athleticism and explosiveness and those complimentary characteristics only amplify when lined up in the Double “A”.

Since 2015 the Minnesota Vikings have ranked towards the top of the league in limiting the number of touchdowns surrendered and points allowed yearly. The key to any great defense is limiting the number of points an opposing team scores. In 2017 the Vikings rolled out arguably Zimmers best defense as the team ranked first in touchdowns allowed and third in points allowed since 2015. Two things were not surprising about 2017, it was the Vikings latest, best shot at a championship and the Bruin duo played in all 16 regular-season games.
The two years missing from these lists, 2018 and 2020, both saw Barr and Kendricks missing multiple games due to injury. There are, of course, other factors that attribute to these numbers, what cannot be ignored is Zimmer needing to adjust or dial back certain aspects of his defense when missing one of these two studs. This was evident last year when Barr was lost to injury for the season. Eric Wilson did an admirable job filling in for Barr, but ultimately Zimmer could not duplicate the same success. Things became even worse when Kendricks was lost for a few games and Zimmer had no choice but to roll out a vanilla version of his defense.

This is not to say that the other components of the defense are not also vital to its success. The likes of Harrison Smith, Xavier Rhodes, Everson Griffen, Danielle Hunter, and Linval Joseph have all etched their names into Vikings defensive folklore.
But it is the Barr and Kendricks tandem that allows Zimmer the freedom to dial-up variations of the Double “A” that confuse even the most seasoned quarterback. The defensive scheme itself is also a perfect compliment to Barr and Kendricks’ abilities. With Barr eligible to hit free agency next year, the team in a cap crunch, and looming extensions to Hunter and Brian O’Neill; this could be the last year to enjoy the mastery these two former Bruins employ on the field every Sunday.