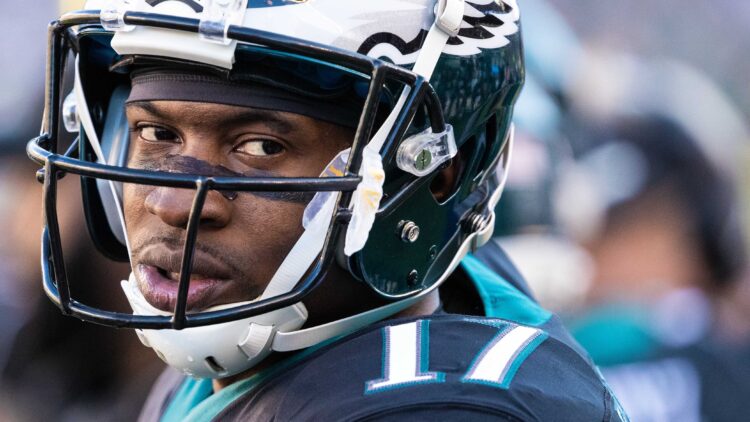 Note: This article originally appeared on our sister-site, PurplePTSD.com.

The WR3 slot on the Minnesota Vikings depth chart has long been a position that is not a priority. When Stefon Diggs and Adam Thielen unexpectedly rose to prominence five years ago, the lackluster career of Laquon Treadwell largely paved the way for a “meh” feeling about the Vikings and WR3.

And that sentiment continues to linger.

During the last two seasons, head coach Mike Zimmer implemented Kyle Rudolph and Irv Smith Jr. as tight ends inside his offense, so those men took the “target load” that a traditional WR3 might require. Once again, Minnesota has no bonafide WR3 — unless Bisi Johnson, Chad Beebe, or rookie Ihmir Smith-Marsette blow the coaching staff away this summer.

Ergo, the team, in theory, could bolster the WR3 position. Here are some men that are available.

This man has direct ties to new Vikings wide receiver coach, Keenan McCardell. That alone should make Westbrook a dazzling frontrunner for the gig — if Minnesota is looking for an external WR3 at all.

But Westbrook tore his ACL in Week 7 of 2020. Not long ago, that meant the player would probably be out of commission until at least Week 7 of the following year. However, players recover from ACL tears much quicker in years of late.

When healthy, Westbrook nabs about 65 catches for about 700 receiving yards and 3 or 4 touchdowns inside of a questionable Jacksonville offense. This statistical production is absolutely perfect for the Vikings offense — and it’s a statline the franchise has not seen in years at the WR3 spot.

Tate used to be quite productive before age began to set in. He is always more of a “yards guy” for receiving acumen, infrequently hauling in touchdowns compared to his yardage output. But who cares? Tate — even at age 33 — would be an instant upgrade to the Vikings WR3s of the last half-decade.

Tate has only played with NFC teams in his 11-year career (SEA, DET, PHI, NYG), and maybe an audition with the Vikings can continue the trend. Tate is sure-handed, experienced, and has Super Bowl credibility — he won a ring with Seattle in 2013.

The Notre Dame alumnus played 71 games with the Detroit Lions, so the Vikings brass should be extremely familiar with his game.

This one is about name recognition. Folks know Jeffery because he had two extremely noteworthy years with the Chicago Bears in 2013 and 2014 — seasons when he registered north of 1,100 receiving yards respectively. Those were the Jay Cutler days and circumstances of Bears wide receivers putting up gaudy numbers are generally a rarity. But Jeffery indeed did so.

He was injured for most of 2020, garnering just 13 targets from Carson Wentz and Jalen Hurts. You probably know Jefferey from fantasy football, too. He is drafted in late rounds under the pretense “this will be the year” that he returns to normal — and then that never effectuates.

If Zimmer can squeeze 12 to 16 games of good health from Jefferey, his veteran experience would be an astute addition to the Vikings WR corps.

Ford attended the same school as new left tackle Christian Darrisaw, Virginia Tech University. He emerged (a bit) in 2019 and 2020, hauling in 520 yards in the air during those two campaigns.

Unfortunately, Ford has never scored a touchdown and is a 7th-Round talent. Yet, in terms of WR3 “solutions,” Ford feels like the type of player that Minnesota would sign and “call it good.”

He’s also never played with two men like Thielen and Jefferson, nor has he seen ample, consistent targets in an offense. Hypothetically, the Vikings could provide that in 2021 if new offensive coordinator Klint Kubiak prefers to throw the ball more than Zimmer teams of recent years.

An addition of Fitzgerald to the Vikings 2021 roster would be a prophecy fulfilled for many. Every season that Fitzgerald has been theorized to depart Arizona, Vikings fans salivate for a relationship as the 37-year-old was born in Minneapolis. It never materializes and probably won’t happen this time either.

But Vikings enthusiasts can dream. Fitzgerald may or may not want to play one more season before retirement — why not do it in his hometown?

Fitzgerald owns arguably the best hands in NFL history, and those mitts are the exact reason that he’s remained a household name — even his elderly gridiron years.

The man would sell gobs of jerseys.