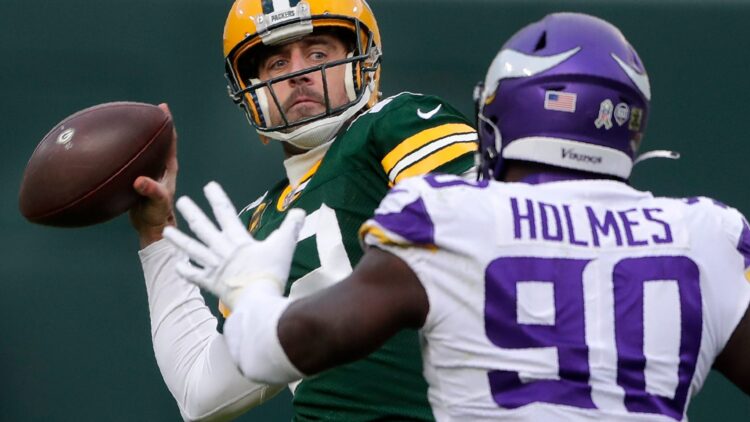 The months-long flirtation of Aaron Rodgers potentially playing for the Denver Broncos, Las Vegas Raiders, or nowhere is deceased.

Rodgers – for some reason – orchestrated almost 90 days of drama pertaining to his 2021 whereabouts, a saga of Brett Favrian proportions. Now, Rodgers is back in Green Bay with boots on the ground. He’ll be the QB1 of the Packers for a 14th season.

When the tarot cards suggested Rodgers was done in Wisconsin, the 2021 stakes for the Minnesota Vikings changed. Rodgers out of the way would mandate that Vikings skipper, Mike Zimmer, win an NFC North crown to continue beyond this season. After all, the signal-callers within the division would formulate a ho-hum outlook: Andy Dalton, Jordan Love, and Jared Goff.

But that little trifecta is kaput as Rodgers will once again headline NFC North-related affairs. Hell, he’s the reigning MVP.

The Vikings will still need a fancy season for Zimmer to see 2022. Since his hire date in 2014, Zimmer alternates good seasons with mediocre ones. And because the expectations were high heading into 2016, 2018, and 2020 – even-numbered years when Minnesota underwhelmed – Zimmer must continue the strange pattern in 2021. That is, he likely needs a playoff win or two for Vikings management and ownership to employ him in 2022. A segment of fans in Minnesota already believes that the Zimmer era is “stale,” so another bout with 9-8 or 8-9 could serve as the catalyst for a head coaching change.

General Manager Rick Spielman rebuilt the Vikings roster during the offseason, drafting Christian Darrisaw and Wyatt Davis to finally cement a youthful offensive line not constructed how square-peg-round-hole parameters. Then, Spielman also added a sheaf of free agents – mostly on defense – to disallow injuries from derailing the enterprise, as was the case in 2020. New to the team? Patrick Peterson (CB), Dalvin Tomlinson (DT), Bashaud Breeland (CB), Xavier Woods (S), Sheldon Richardson (DT), Mackensie Alexander (CB), and Stephen Weatherly (DE), among others. As perhaps a cake topper to the bonanza of free agents, Spielman finally signed an offensive free agent in Dede Westbrook, who will presumably play WR3. Minnesota hasn’t used one of those in a modern capacity since 2009 when Brett Favre flung the ball to Sidney Rice, Percy Harvin, and Bernard Berrian.

So, the stakes with Rodgers returning to Green Bay no longer dictate that the Vikings must win the NFC North, but that would be a tremendous perk. The Zimmer version of the Vikings has long seemed like a team that needs homefield advantage to thrive in the postseason. Winning the division is the simplest way to effectuate that vision. If the Vikings do play second or third fiddle in the division for a fourth straight season, Zimmer must find the blueprint for winning a postseason game while performing aptly in the follow-up contest. After the team upended the New Orleans Saints in the 2019 season, the subsequent effort at San Francisco was lackluster, leaving some cynical fans to ponder whether the upset of the Saints did “more harm than good” in continuing the Zimmer era. That mindset is silly, but it is no fun to be shellacked in the playoffs – like the Eagles did to the Vikings in 2017.

Back to normal we go for Vikings expectations. It is probably “ok” if Rodgers and the Packers do their thing, triumphing in the division or reaching the wildcard.

However, Zimmer needs a playoff win – by any means necessary. And he probably needs two of them in the same month.